The road is long.

Each kilometre ticks past, treacherous as a slow clock, the arrythmic brute. Tick… tick… … … (tick?).

At first it’s cool and quiet, but the sun creeps up from behind the mountains and we have to stop for sunscreen and hat-pplication.

The sun begins as we continue along the road between Gračac and Knin.

Roads are hard and hot underfoot. No give in the dense, sear-sealed asphalt. The foot must give instead, and give it does. One foot after another on the white lane line. My feet squish into strange shapes. Trucks gush past leaving a flurry of hot wind in their wake.

We realise it could have been fun to take a photo at every kilometre mark, but it’s too late. No fun. It’ll just have to be one photo at kilometre forty-nine instead. 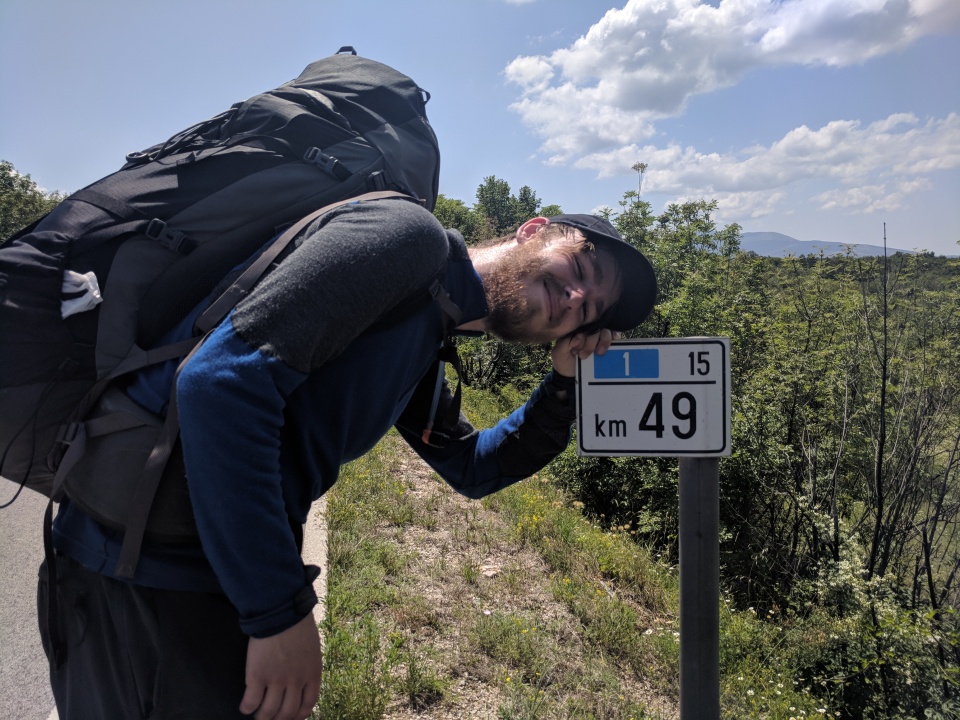 The gutters are littered with dead butterflies and flattened lizards, like lengths of shiny hosepipe.

Have I ever not been walking this road?

A few kilometres from town and we see a dead cat on the road, a beautiful tortoiseshell. Cars swerve into other lanes to avoid him. We carefully drag him off the road and into the grassy verge. He is stiff, but a flush of wet blood spills from his mouth and trickles across the pale gravel, slipping between the cracks like pulled teeth.

The grey tapered triangles of the butterflies twist and pivot on the ground like clusters of pippies squirming at the beach.

“Why are you staring at the ground?” 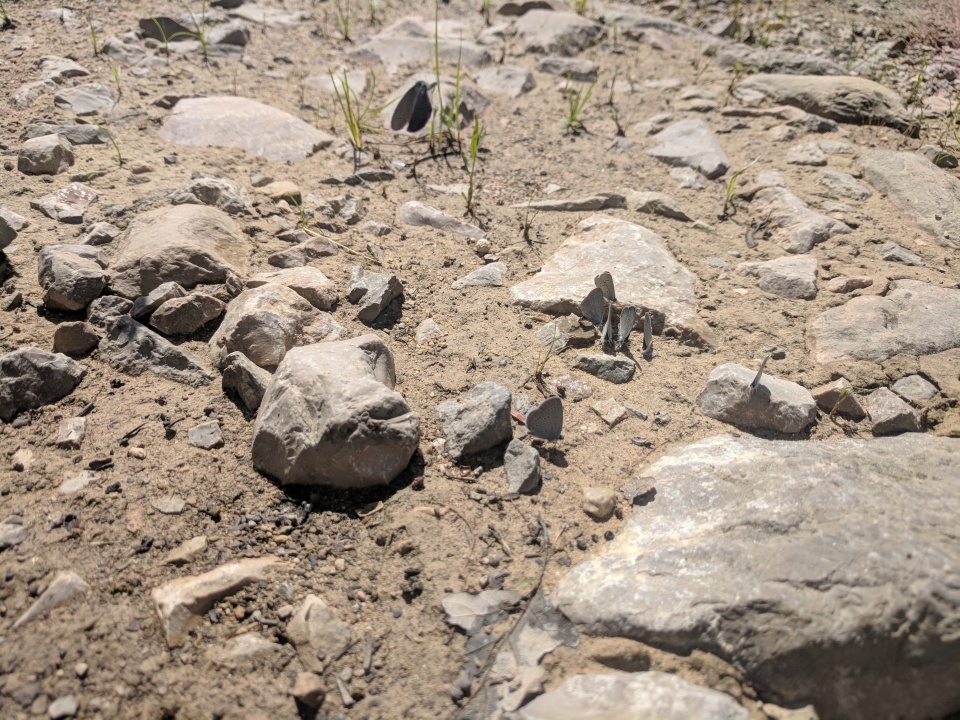 We peel off the highway at a hairpin bend and roll down a grubbly hill to the river. A bush fire has come this way. I occasionally fall into trees which smear my hands with charcoal.

Grubbly is a new word I have invented. It means something made of gravel, where the gravel is lumpy and awful and more like rubble. Hence, it is grubble.

I wish they’d never put grubble on this godforsaken road.

I have also invented the word scrubbly which is for a mountain that looks like a pile of gravel which has been left so long beside a building site that a few shrubs have gamely taken root. Some mountains are beautiful. Others are scrubbly.

Why do we humiliate that scrubble by trying to claim it’s a geological feature?

What does this sign want me to do? Does it warn of blankness ahead?

But we were falling down the hill towards the river.

At the bottom, we see Knin! Knin is a small city. You’re meant to pronounce the ‘K’. Like in k-nit.

The city promises cool yoghurt and ripe cherries, like a cold, wet towel to the brain. It’s 1 pm and we have already finished our alloted kilometres. Somehow.

It was freedom to camp last night. As much as I love the mountain huts, I really prefer to camp. It’s not so much slot the human into bed and pull them out again like a USB stick. Instead, we get to have a good sniff around, make the space our own for a moment. Notice the thick layer of rotting blackberries.

In Knin, however, we’re back inside again. For this reason, among others, I’m kind of excited to leave Croatia. In a week, we’ll cross the border down into Bosnia, where we can wild camp again. Much of the fighting during the Yugoslav Wars occurred in Bosnia and Herzegovina however, so mines and unexploded ordinance are more common there. We’ll have to be careful.

I rehydrate as the afternoon passes. Have a rest. Do some reading. Find my marble.

Perhaps today hasn’t been quite so absurd. Perhaps it’s all returned to normal?

I then do a load of washing and turn everything blue.

Start and end points: Roadside near Prevjes to Knin

7 thoughts on “Day 26: Roadside near Prevjes to Knin”