We wake up and it’s still raining. Despite this, the sun is shining, and our four season tent is getting pretty warm. It’s a sticky, humid heat that makes me sweat even though I’m still kind of cold. All in all, a morning to sit tight and be miserable.

As the rain eases off, I crawl outside to go grab the food from where we tied it up over night. A quick Google reveals that the bag is supposed to be about seven meters off the ground to protect from bears. I’d say ours was about one-and-a-half.

By 9:30 we’re walking and the forestry land gives way to Rakov Škocjan Landscape Park, our first glimpse of the Slovenian Karst. The Karst is basically a limestone plateau extending through South-Western Slovenia and down to the Adriatic. I can’t pretend that I’ve learnt that much about its geology from the numerous Slovenian language information boards, but I do know that it’s famous for its caves. And for good reason; they’re staggeringly huge. We can only see the fragments that have worked their way to the surface, but beneath our feet are vast unlit chambers. It’s a disconcerting thought. 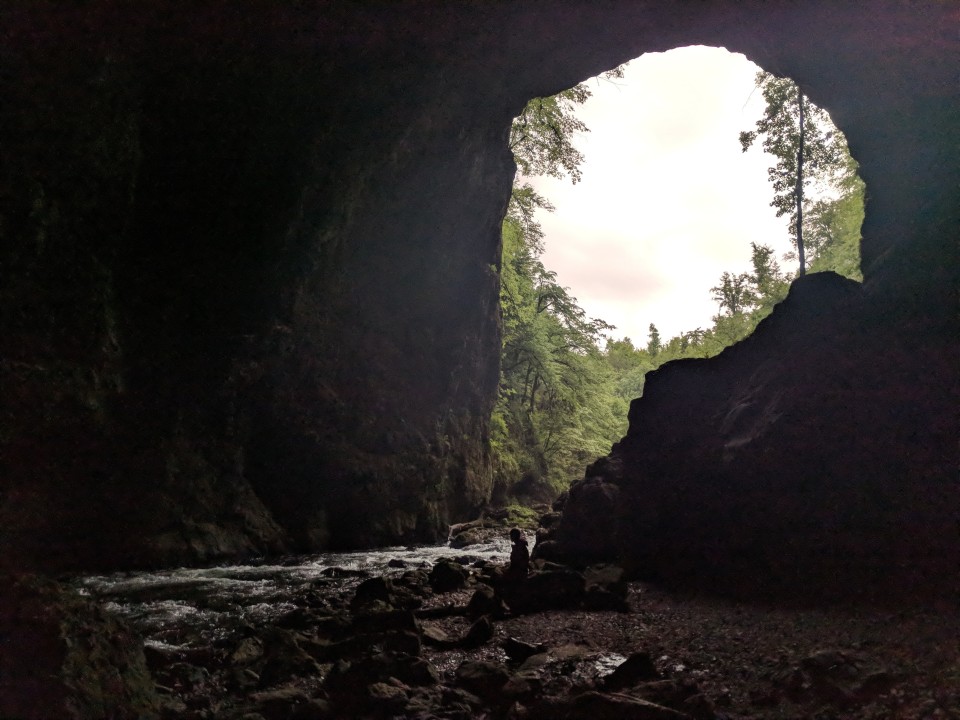 The Weaver’s cave, named for a weaver who snuck inside so he could continue his work on a Sunday. He disturbed the local Witches and Trolls so much that they turned him to stone!

We do our best to follow the dirt track that should in theory take us past the top sights of the park, but increasingly we find ourselves heading into a labyrinth of unlabeled secondary paths.

Somehow we end up at one of the photo spots – an ecologically important riverside meadow. It’s idyllic – like something out of The Wind In The Willows – but walking through the thigh high grass soaks my trousers to the skin. I think longingly of the waterproof over-pants in my pack. But putting them on would require taking off my shoes, and there’s nowhere dry to stop… We walk on.

Not pictured: the suspicion that we should probably have had lunch by now.

This park really is dramatic. Just when I think I can’t be bothered to follow any more signs to the humbly named Little Natural Bridge we stumble upon it. Walking closer, at first all I see is a simple stone arch, maybe twenty meters long. But then I realise that it hangs over nothing. Moving closer, the nothingness stretches out to reveal a massive valley beneath the arch. It’s far too deep to fit in a single photograph. 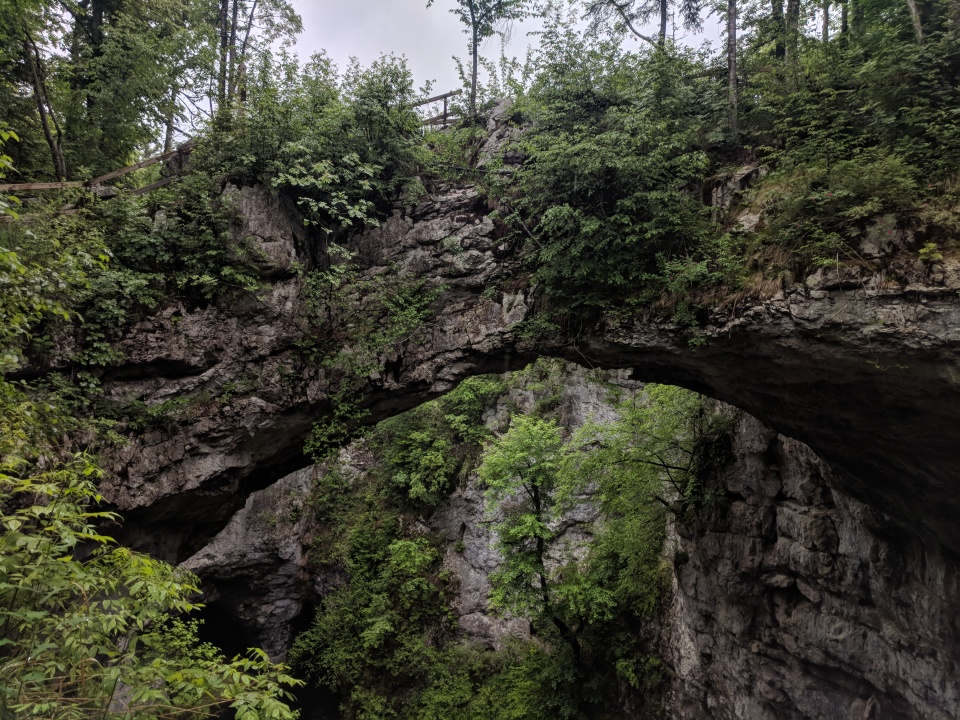 The valley beneath this bridge used to be yet another subterranean cave.

The rain picks up again. Due to our late start it’s pushing 1 pm, but we don’t want to eat lunch in the rain. Besides, we’re in a bit of a limbo, having left Rakov Škocjan and headed back onto the endless forestry roads. These dirt roads are well maintained and we make good time, but it’s like hiking on fire trails in Australia: fine, but a bit soulless.

We’re following a few different GPS tracks, and the route from here to Cerknica is one of the (many) times they disagree. On one hand, the so-called official route would take us straight along what look to be forestry roads: efficient but dull. The other option is to follow the route of Eva Smeele, the prolific and tireless de facto ambassador of the Via Dinarica. She heads out along the border of a disappearing* lake, adding a cool 10 km to the day. As much as we’d like to take Eva’s scenic route, our grumbling stomachs and wet socks are pulling us in a more direct path. So we compromise, and head for a lookout over the lake, before making for Cerknica via farm roads.

By the time we reach the lookout the rain has stopped. And it’s beautiful. These extended green fields aren’t what you’d usually think of as a lake, but Google Images informs me that come (a lot more) rain, this basin fills up with water. For a little while at least.

Taken from a well placed bench.

The path through fields and into town convinces me that we’ve made the best choice regarding the route. Cerknica is quite large, almost as big as Postojna, but it manages to remain welcoming, clean and picturesque. It’s after 3 pm and we’re starving, so we beeline for the local Spar, pick up some chocolate and cheese, and eat a well-earned lunch.

I know it’s a stereotype, but the photos of food that decorate supermarket entrances are a little different here. Where in Australia you would have closeups of garden vegetables quivering with droplets of water, here it always seems to be the big three: bread, meat and cheese. And then another picture of meat for good measure.

Still, the array of vegetables stocked in the local supermarkets is just as good as anything we found in the UK. Our fears about difficulty finding vegetarian food have turned out to be unfounded thus far.

Replenished by our sandwiches, we stagger over to a cafe to drink coffee (which has so far been delicious everywhere I’ve tried it) and charge the phone. We do have a solar panel, but it doesn’t seem to be able to power anything at the moment. Still figuring that one out. That said, I could get used to these daily cafe stops…

But we’ve still got further to go before we can tap out for the day – we’re aiming for the mountain hut atop Slivnici. We haven’t really walked that far, but it’s after five now and we’re pretty tired, so starting is a struggle.

A brisk 400 metre climb leads to the closed mountain hut (‘planinski dom’ in Slovenian), but thankfully it has an awning under which we can hide from the returning rain and work on our blog posts. There’s even a power point! We pitch the tent nearby, and settle in to watch the sun set and clouds open up.

*Disappearing because the water sinks underground into yet more caves.