Back in our first week on the track, maybe day three or four, when it felt like we’d barely begun, I remember Callum saying that when we hit the forties, that’s when it’d feel real. We’re definitely doing this now. It seemed so impossibly far away, but here we are. Day forty. And it certainly feels more meaningful to say we’re on the Via Dinarica now than it did at day four.

Day forty begins like many other days – muesli on an old wooden picnic bench, with a beautiful view. Today we look out across the forested valleys of Ravna and Jablanica, from where we came yesterday. Behind us is the expansive massif of Prenj, a large mountain fondly known as the Herzegovinian Himalaya, for it’s tough terrain and beauty. Milanova koliba sits right on the edge of the mountain. Today, we’ll walk into the heart of it and, hopefully, reach the hut we intended to reach yesterday…

Because today should essentially be a half-day, i.e. the second half of yesterday, we decide to add Cetina peak to the beginning, which we can climb directly from the hut. A rock formation on one side and grassy mountain on the other, Cetina is a prominent feature of Prenj and, at 1992 m, quite a respectable one. It should take about two and a half hours round trip, leaving us enough time to hop over to Jezerce kuća for the night. We leave our packs at the hut, and head up.

Looking back across the valley from the foothills of Cetina.

The route snakes up the mountains’ grassy flanks for an hour to Greda pass, before flicking north to the summit. Unfortunately, we reach a signpost there which points towards a shortcut towards Jezerce, which we could have taken if we’d brought our packs along… thereby saving ourselves about an hour and a half of walking. So it’s slightly frustrated that we reach the summit of Cetina (with ourselves, that is, for not doing better research about the tracks up here – we also later discover it’s in the guidebook, that we don’t have). It’s a fantastic panorama though. The mountains span out around us on all sides, all pale snow and rock against dark green bands which must be forest. A few speckles of rain come down, painting the rocks like eggshells. So this is why people rave about Prenj…

Looking out from Cetina.

We get back to Milanova koliba, collect our things and can finally start to cover some of the distance between us and the hut. We retrace our steps back towards Cetina with our packs (grumble grumble) and branch off to Lučine novo sklonište, which is our first stop along the way to camp. To get there, we have to climb out of the little valley, again. It’s a bit slow going at first, but soon the track levels out and we traverse a lumpy, grassy plateau over to the shelter.

Lučine novo is a tiny thing. An A-frame made of wood and a tarp, with a foam floor, it’s definitely a budget sklonište. But it’s clean and warm and tidy, with a fireplace and a wheelbarrow full of clean blankets. It feels very loved and that’s what really makes a sklonište. I think if I were to plan our Prenj hiking again, I’d make day one start from Ravna, instead of Jablanica, which would give us enough time to end here, at Lučine, instead of Milanova. But for now, we’ll just have to settle for lunch on the picnic table outside.

The one shame here, though, is the pile of half-burned rubbish in the fireplace. It’s fairly upsetting to see. I always assume that hikers are of a similar kind, people who respect and are thoughtful about the places they see. But this is just lazy and thoughtless and it makes me frustrated.

Rubbish piled in the fireplace outside.

Over lunch, it starts raining again, so we shift inside and linger a little longer than we possibly should, reading aloud from Far From the Madding Crowd. We leave around 2 pm, with about 10 km to go – another six will bring us to Vrutak kuća, and then the last few over to Jezerce.

The route to Vrutak should be pretty quick and easy, and it is, until we reach Tisovica valley, where, with the tip of the hut’s duck green roof already in view, the path suddenly swings left, almost back the way we came. Comments from previous hikers have warned us that the route is different near Vrutak, due to mine suspected areas. And indeed, spray painted on a rock before Tisovica, just near a spring, was the word ‘MINE’ in capital letters and an arrow pointing vaguely backwards. It was unnerving. Did it mean just one mine, mapped and known, sitting dormant, a shiny black tick underground? Waiting near where the people must go for water? Or are there possibly a few mines, they suspect, don’t know for sure? What happens if snow falls heavily, or if a tree falls, or if rocks shift? I don’t understand. We know nothing, really. We’re just told to stay on the path and it’ll all be okay.

The safe route around the valley adds another half hour or so on our way to Vrutak. It’s a glorious place though – fresh green grass, warm and rich. A flock of sheep nibble and worry the ground whilst a black sheepdog watches on attentively. At half past five, we reach a sign saying Jezerce is still three hours away. Not a good sign. Twenty minutes later we’re at Vrutak. For a time we debate whether to camp here instead, but the kuća is locked and there’s nowhere to shelter outside… whereas Jezerce is unmanned and always open. We determine to push on. It stays light past nine here, so we should be fine to get there by nightfall.

We speed along in the early evening light, pushing the pace as the track loops around the base of Zelena glava and Otiš, two of the highest peaks in Prenj. We’ll climb them tomorrow. The walking is actually lovely, along the sides of small valleys, the path soft and fragrant with pine needles. Within an hour or so we reach the spring before Jezerce and then, suddenly, we’re there.

There are three sets of heavy doors, each keeping the cold night air from the kuća. We diligently open and close the first two to find a small corner stacked with wood. The final door opens to the hut itself. It’s just lovely. My first thought is how glad I am that we pushed on. My second is how much I’m looking forward to lighting that fire. There’s a plastic bottle of brandy on the table which we use to warm up a little as the fire is lit and the dinner (pasta with tinned tomatoes, peas and some leftover cheese) cooked. I lay out my hiking mat to dry on a bench and rub my feet. What a fantastic place this is. 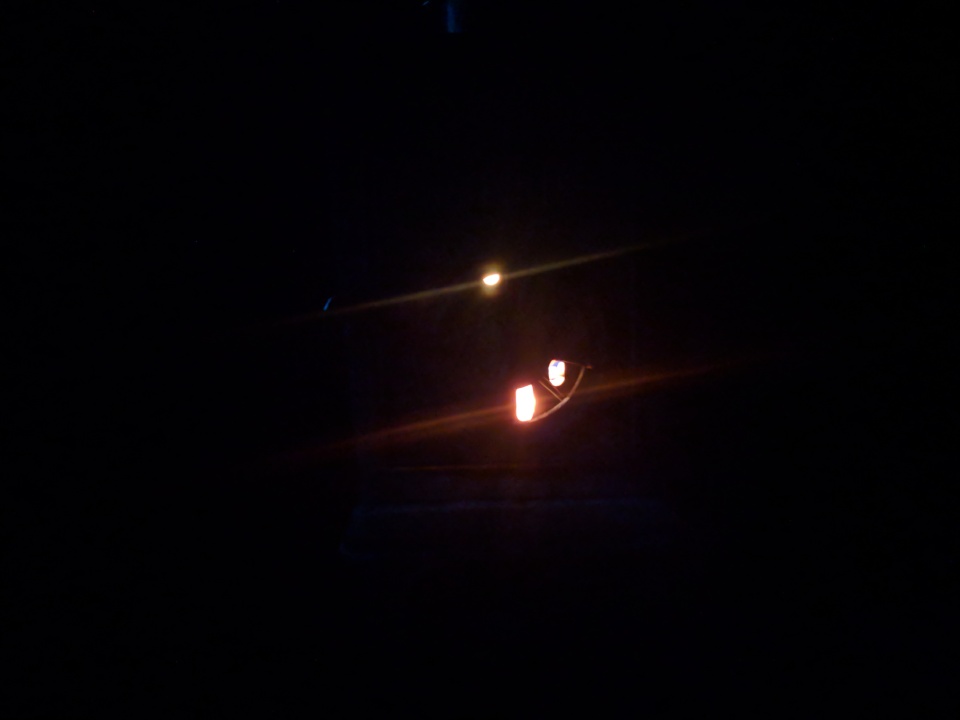 The only photo I took of the inside of Jezerce kuća! Our little fire blazes in the darkness.

Prenj has got to be one of my favourite places so far on the Via Dinarica. It’s remote and beautiful, and it was certainly a challenge to reach. After dinner, I snuggle into my sleeping bag with the heat from the fire heavy on my face. I try to be as present as possible, to love this place for the short while that I can.