Okay. Yes, I admit it. We were meant to leave Boračko jezero yesterday. There’s no way around it. We got up, ate our muesli, packed all the stuff (how do we have so much stuff?!), walked off down the road and even started our GPS tracker. Yep, all guns blazing!

Except, all guns weren’t exactly blazing. More like… gently smouldering, but in a damp and unsalvageable way. By this, I mean that Callum was really exhausted. He’d slept pretty badly and was on the nonfunctional side of functioning. We clobbered together bravely and pushed on anyway. But it really just wasn’t our morning…

Next problem was that bloody dog, Azuz. The most frustrating dog in the world. He found us again in the morning and began by happily sitting down and chewing my sandals, while they were still firmly attached to my feet. He then continued by stealing Callum’s socks, followed by my hat. I love dogs, but it’s hard enough keeping clean while hiking without having a never-ending source of slobber stealing your things. Possibly the worst bit though was as we walked out from the campsite and he began to practice his tripping-humans-over skills by prancing in front of us and stopping suddenly. Gah.

Callum tries to be firm with the sock-stealing dog dubbed Azuz, and fails miserably.

Our problems continued at the shop, about a kilometre down the road. Our plan was to do a quick resupply – just a few snacks, a bit of fresh food and some dinner supplements – before heading on. But there just wasn’t much there. The fresh food was great, lots of fruit, but nothing we could really add to our dinners. We checked out the petrol station up the road, which had been abandoned, and asked a man at an information desk who let us know that the small shop back down the road was the only one around. Hmm. So we had to walk back.

Long story short, it was a mess. We decided we needed a full day in Boračko jezero to recover. We had a swim, replanned our days, resupplied food as best we could and went back to the campsite. Azuz stuck around, but gradually calmed down and stopped chewing everything. Tomorrow (i.e., today) would be attempt two.

So this morning we wake up ready and head off early. Back down the road, past the shop and empty petrol station, and out to the Nevrata river. The mountains start to rise and roll around us, the trees thicker and darker, the terrain steep. Springs gush on the roadside and the river thunders in the valley below. Just a few kilometres from the sleepy holiday town of Boračko and we’re in the wild again. Today, we make our way up into the Herzegovinian highlands and into canyon country. Despite our non-start yesterday, I’m really excited for this next bit of the walk.

Past the road, we cross the Neretva river and head up to a small village, Kasići, which has a couple of springs and a young girl shepherding sheep. She calls to them and cries loudly and cajoles them heartily. It’s a constant dialogue. Seeing us looking slightly lost, she points us in the right direction up the hill, towards the Rakitnika river.

At this point, the river is strong but small, and we cross it with a small wooden bridge. Later, it will become an incredibly impressive canyon. But for now we sit at the picnic table by its banks for a rest. We’re just getting stuck into some more Far from the Madding Crowd (Farmer Oak’s flock has just flung itself off a cliff leaving him destitute, so it’s all a bit tense) when three hikers wander down the track from the other direction.

They’re from Maryland, DC, and are doing the Bosnian section of the Via Dinarica. It’s been a long time since I’ve had a good, extended conversation with anyone apart from Callum. I hadn’t realised how much I missed the freedom of having a shared language. We chat about the trail ahead and behind, about how it’s all going. They give us some advice, and we give them some. They recommend we stay at a place called Simovića kuće in Vlaholje, which we’ll pass in a few days. It’s really nice to feel that here, at this wooden bridge in the middle of nowhere, the five of us are making up a small part of the Via Dinarica community.

Past the river though, things start to go a bit downhill. By which, of course, I mean uphill. The hill in question, Vis, is a lot steeper than we were expecting. We slow to a crawl as the sun beats down on our backs. I drink water only to sweat it out seconds later. But before we reach the summit, it switches again and suddenly, buckets down rain. 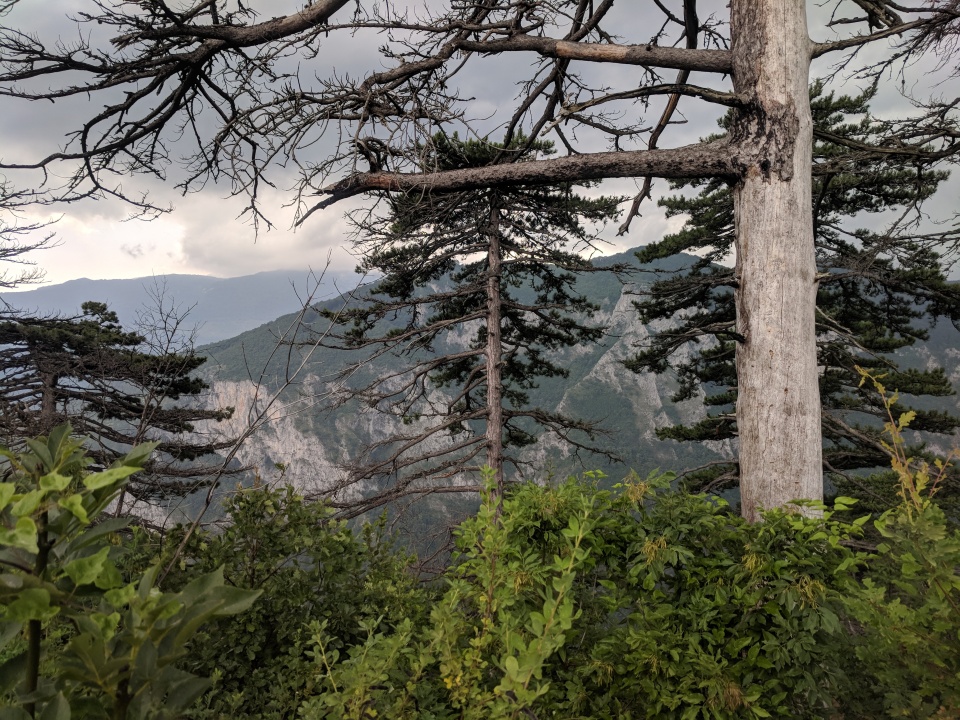 The only photo I took in about three hours, looking out from the ridge past Vis peak during a brief lull in the rain.

I say buckets. I mean really buckets. It’s the kind of rain that when you’re caught in, you just feel hopeless. You know you can’t possibly stay dry in this. It goes from a gentle patter to God turning on the fire hose full blast in the space of a minute. We frantically pull on the rain gear. I yank on my gaiters, wet pants, and raincoat, aware of the irony that my shirt is already damp with sweat from the climb. But what else can we do?

The rain is just relentless. We slosh up the rest of the hill as it turns to rivulets, and head along the ridge side of the neighbouring peak. The track is thin and thick with foliage which gathers the rain and brushes it mercilessly against us. My new boots and gaiters hold out for about an hour before they’re sopping through, along with my shirt and hiking pants which are wring-ably wet despite my raincoat and wet pants. My pack raincoat also gives out, and I can see my sleeping gear sucking up the damp. I look like I’ve been chased by a swarm of bees or something, and have had to jump full pelt into a river to save myself. I’m beginning to wonder why I bother with expensive hiking gear, and don’t just hike in lightweight summer dresses, which have the advantages of being cheap, drying quickly and, if not keeping out the rain, at least living up to their expectations.

The rain finally eases and we have a brief debacle in the foothills of Vrankse trying to find an elusive water source, which, despite having a sign and dotted path leading towards it, is famously hard to find, may either be a cave, well or cistern and may involve climbing into to retrieve sed water. True to reports, it’s very hard to find and we muck around for half an hour before sheepishly enlisting the help of another shepherd, who laughs uproariously and mimes that we should just get some from the huge puddles on the ground before pointing us in the right direction. When we get there, it is actually hard to say what it is. But there’s lots of water and no climbing involved. We fill up and can finally start to climb.

The climb up Vranske is steep and trackless. No helpful dots here; not even a trodden path. Just a slippery, leafy slope. We slog uphill following a gully, falling over a lot, feet slipping around in our shoes. I think I’m probably carrying an extra 10 kilograms of water up with me. I brighten up when we pass some African violets, which til now I’ve only ever seen in pots. That’s one amazing thing about these countries for me – the flowers I’ve only ever seen in shops and bouquets, like poppies and lilies and irises, just grow from the roadside.

An African violet growing in the leaf litter. The hill was so steep that I was practically sniffing them at this point.

The top of Vrankse stijene, once finally reached, is incredible. Grassy meadows covered in flowers appear before us, with huge mushrooms like pale dinner plates growing in fairy rings. On the far side, Vranske falls away into the cliffs above Rakitnika canyon. The rain has properly ceased now and I feel like I’ve emerged from a washing machine. I breathe a sigh of relief.

Simultaneously soaked and relieved at the top of Vrankse stijene.

We stumble along a last few clifftop kilometres through muddy woodland tracks until we reach a meadow, and agree to call it home for the night. I make a clothesline to cheer myself up before checking out the water damage – my sleeping mat is unfortunately soaking, but my sleeping bag has fared a little better and is only damp.

We make tea to warm up and huddle in the cold until we’re fed and watered. It’s a lovely campsite despite the challenges of today and we’ve made fairly good progress, considering the weather.

Our campsite in the meadows.

My bed is so wet though. It’s sticky with water.

It’s going to be a long night…

Start and end points: Boracko jezero to meadows past Vranske stijene (plenty of good camping between Vranske stijene and Blace; abandoned wells at Blace if you need water)