Kris gasps excitedly and dashes forward to pick something off the ground, heavy pack and tender blisters forgotten.

I’ve hardly had time to wonder what she’s found this time, before a blue circle comes hurtling through the air towards my face.

Luckily, Kris is rubbish at frisbee, and it flutters to the ground closer to her than to me.

You might think that a frisbee is not a particularly useful item on a hike, but Kristen “I’ll ‘av that” Perry thinks otherwise, and into the pack it goes. “It could be useful as a makeshift lid for the pot,” she says, defensively. 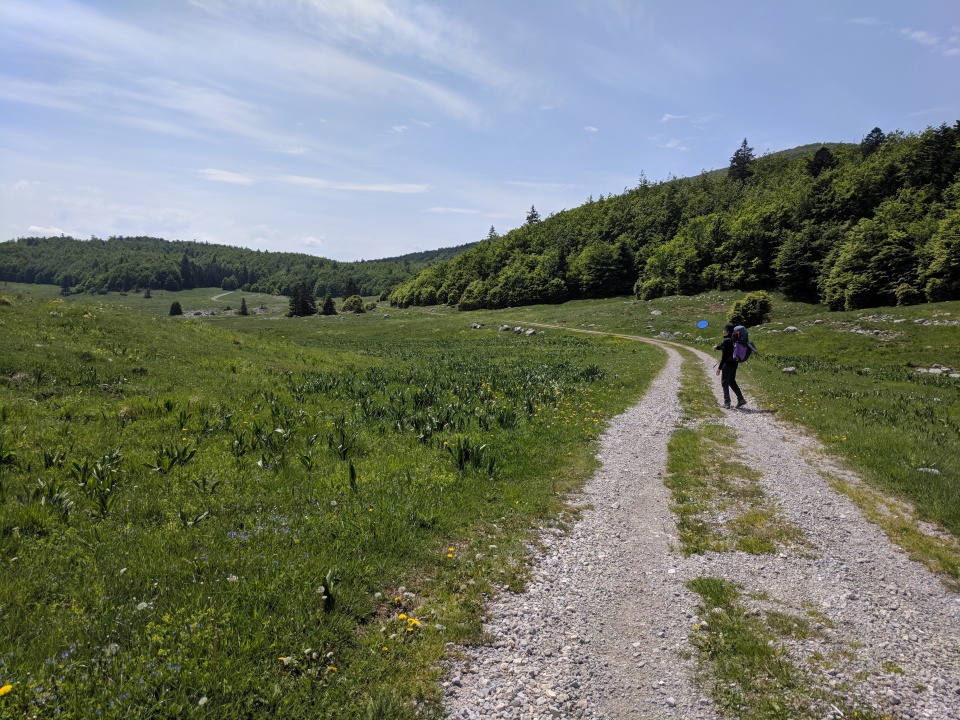 Kristen, on one of her more successful throws.

Today we walk to Schlosserov dom (dom = hut), perched high in the slopes of Risnjak National Park. It should only be a short day, but it’s midday already and there’s been a surprising number of hills, so we’re keen for lunch. There’s also a possibility that the ski resort around the corner might have an open cafe, so we push on pretty promptly – we’re both food motivated individuals. Unfortunately, when we get there, the man at the help desk informs us that everything is closed on Mondays. It’s pretty heartbreaking.

“Rather than employing someone just to tell people that the cafe is closed,” wonders Kris, “wouldn’t it make more sense to have him run a small cafe?”

Would agree, but am too busy crying into sandwich.

After lunch, we leave the rutted vehicle tracks which have carried us thus far, and plunge into the hiking trails of Risnjak National Park.

In the centre of the park stands Veliki Risnjak peak, though for a long time it’s only visible through gaps in the trees.

Look carefully – that little red roof is our home for the night, perched like the Grand Budapest Hotel by mighty Veliki Risjnak peak.

When it does emerge you can see why it warrants its own national park. At 1528 m, it’s only a small peak, but the majestic limestone cliffs tower impressively over the surrounding forest. This is our first real destination in Croatia, and the motivation behind all our road walking of the last few days. 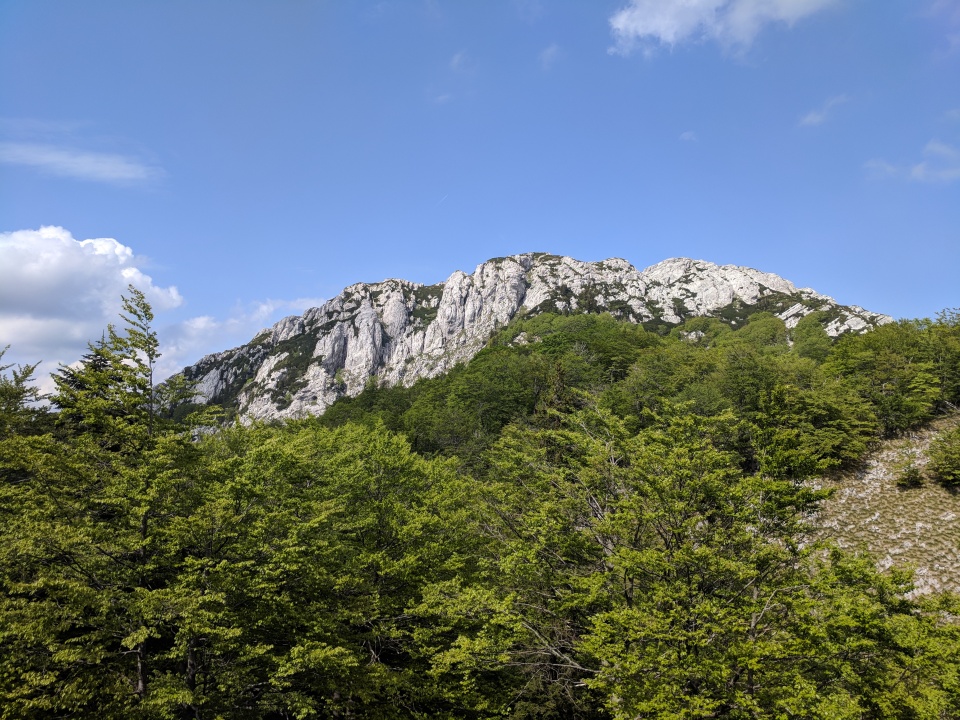 Sadly we won’t have time to summit this great mountain, but the best views are from over here anyway.

Some time later we crawl triumphantly into the hut and make ourselves at home. The main body of the hut is locked up and the water is shut off, but there’s a cosy winter room we can use, and a well behind the building.

Before long we’ve spread our smelly gear across all available surfaces, laid out our sleeping bags on the two available bunk beds, and are just tucking in to a hearty meal of wholemeal pasta when the door creaks open.

Who dares enter our hut?

The bearded face of Andy peers around the open door. “Oh, hey, didn’t expect to see you guys again,” he says in his polite Georgian (the state, not the country) drawl.

(I didn’t tell you about this, but at the summit of Snežnik, we met a couple of fellow Via Dinarica hikers: Andy, and his German friend Thomas. They’ve been sticking to the official route, so we haven’t crossed paths since.)

Thomas arrives a few minutes later, and all of a sudden it’s a party: in this tiny shelter, we have now surpassed free range stocking density.

It’s nice to have a proper chat, and we trade war stories about trying times on the trail. One thing that strikes me about Thomas and Andy is how well geared up they are – they met last year on the Pacific Crest Trail (PCT) in America, and so they have all the latest equipment. Tomas’s pack, he tells us, weighs just 5.5 kg before food and water. That’s nothing.

As the sun sets, we savour the view. We’re back in the Dinaric Alps, but something feels a little different; a little more wild and a little less green. Croatia is still an unknown quantity. We’ll see how it goes.

Looking out from the hut – this is the way we go tomorrow.