The beds at Skorpovac sklonište are amazingly comfortable. They even have pillows here! It’s blissful. And somehow, nobody snores!! This is very rare for a mountain hut. I wake up in a good mood and roll about contentedly for a while.

As I’m packing away my sleeping bag though, I think about the phone. Last night, it’s inbuilt location sensor wasn’t working properly (ARE YOU IN A TUNNEL!? it asked, anxiously). I’m hoping it has miraculously fixed itself overnight. We have to rely on technology a lot on this hike, as, a) we simply couldn’t afford to buy the number of required paper maps to do it non-digital, but also, b) the route still only exists as a set of recorded GPS tracks.

It’s a bit confusing, and the first time I’ve hiked without at least some form of paper map. Instead, we use the following:

It’s a lot to keep track of.

Before I can check on the phone, however, I hear a very sad beep from the corner. Oh no. I have just enough time to see a 0% battery reading on the inReach before it dies. Gah. 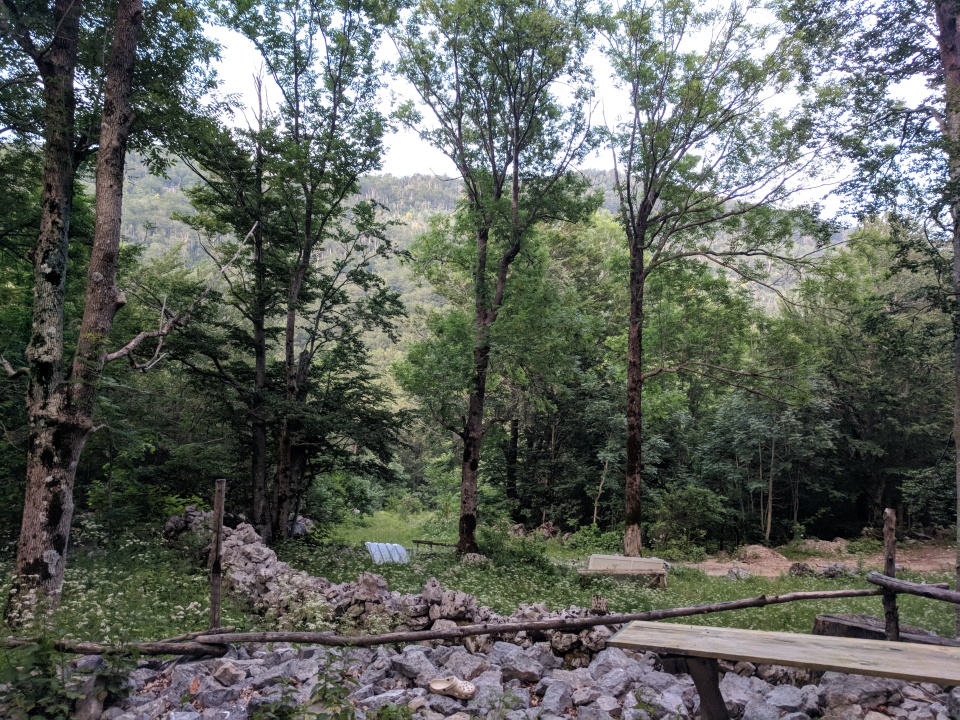 Now, the inReach usually has a very good battery life. It was on 75% last night before I turned it off. Somehow, it has drained itself to nothing. It isn’t exactly vital for our everyday needs (except the emergency beacon part of course, but this is a pretty popular track, plus there’s emergency mobile reception)… but we’re also using it to make a GPS record of the whole walk. It’s very satisfying to see the days accumulate on the map; sometimes the idea of seeing our little blue line squiggle across the map is what gets me through the day. So regardless of what caused it to die, it needs to be revived before we can start walking. An example screenshot from the Earthmate app of our GPS tracks from today’s walk. We’re working on getting the real map onto the blog!

We’ve also been having some problems with the solar panel. It’s over 10 years old, so I’m not exactly surprised. I think I know what the issue is – the AA rechargeable batteries are too old, and are struggling to hold their charge. Right! I say. Let’s use the newer AAAs from Callum’s head torch, which we know are full, to try charge up the GPS. I slot them into the solar panel and link up the GPS. The previously full batteries are drained within two minutes. TWO MINUTES. The GPS gains 1%. I don’t understand how everything can be this broken. Callum is possibly not too thrilled that I’ve also flattened his head torch. We use a bit of our last, precious Kmart battery pack instead.

Tomislav and Goran said their goodbyes a while ago as we stuffed around with our gear. As we finally start walking, it becomes apparent the phone location beacon is still broken.

It’s all too confusing, with everything relying on everything else. I don’t like it. But we head off anyway, our devices limping behind us.

We have 14 km left of the beautiful flat Premužića path to a tiny mountain pass called Baške Oštarije. There is a youth hostel there which might serve food! What with our withering vegetables, today’s lunch will otherwise be wraps, a third of a carrot and a sachet of French dressing. It was a large carrot, but needless to say, we walk quickly. 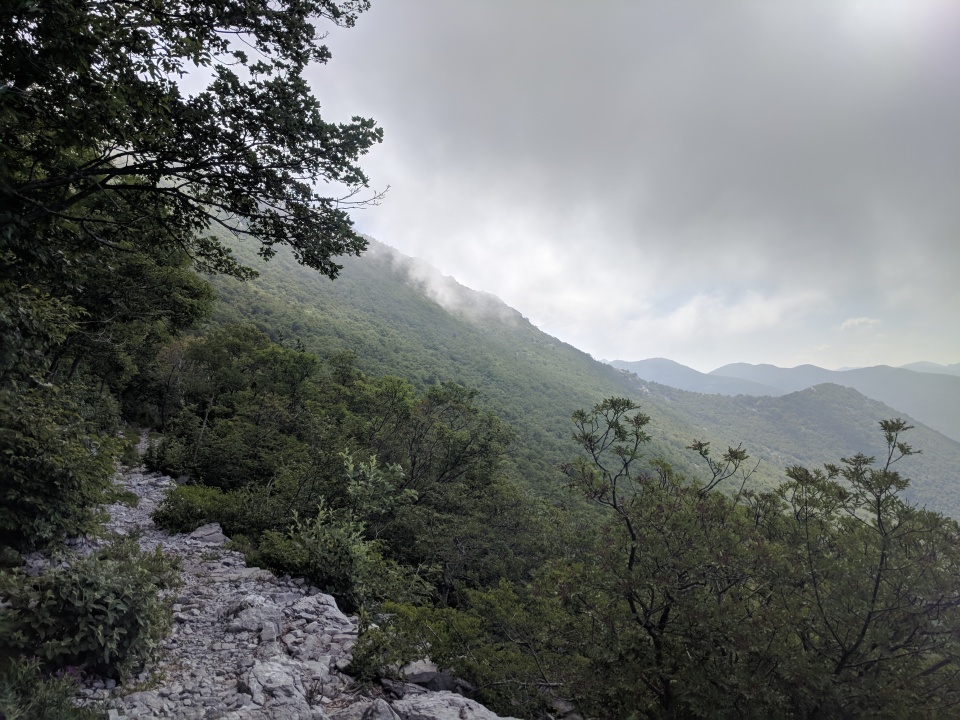 A beautiful section of track, heading down towards Baške Oštarije.

We get into a great walking rhythm and reach the hostel in good time. It feels like we’ve caught a wave, and are churning forwards with it’s force behind us. At one point, the phone finds our location again! Great. As we approach the youth hostel, I see umbrellas set up outside, the universal sign for food. It’s full of cyclists and hikers and buses. Mmm… 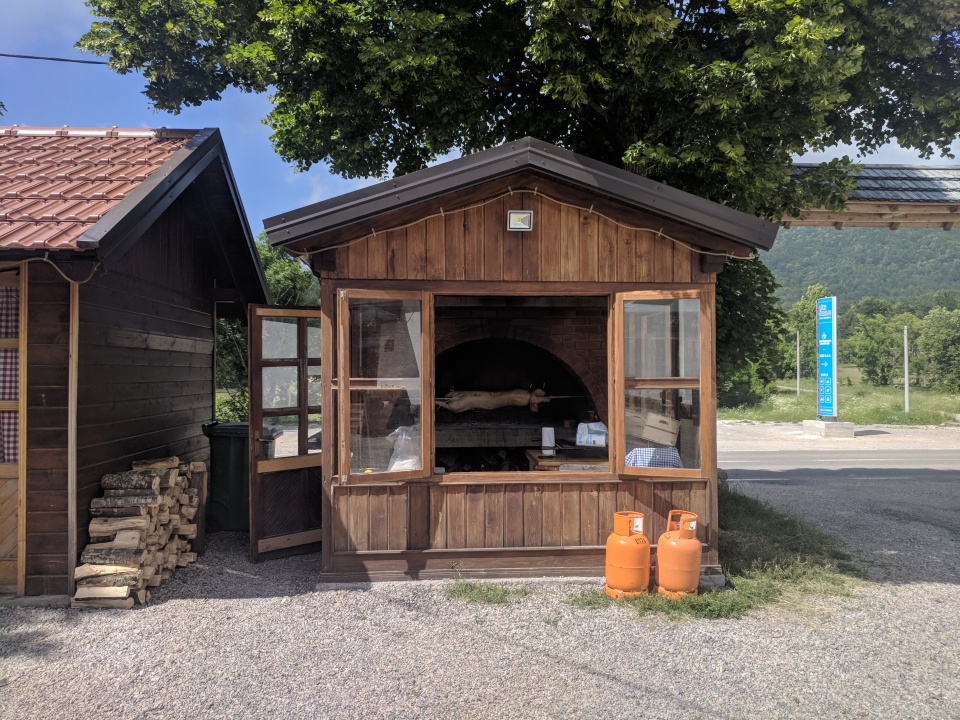 A whole pig roasts on a spit at the hostel… We poor vegetarians struggle out here sometimes, but the hostel is very accommodating.

The Premužića trail ends here for us. No more beautiful flat tracks. The hills spring up ahead, finally liberated! We follow a ski pommel up and out of town for a while, although it’s hard to believe it ever gets cold enough to ski here.

Two pommels hang like big cherries over the grassy slope.

Up and down we go. This section of track is in markedly worse condition than the last. It’s like fallen trees have been piled intentionally across our path, as if a child has made an obstacle course for beetles. With matchsticks.

We are the beetles.

Just past the worst section, we meet a Croatian couple coming down the hill. The man is friendly, with a round, bearded face. We tell them we’re headed for Ždrilo sklonište, a tiny shelter reputed to be in excellent condition. They’ve just been there, they say, it’s fantastic, and also empty – looks like we’ll have it to ourselves!

The shelter is 500 m up a hill, which seems more like a pile of limestone rubble. We slowly make the final pitch home. As I round the final corner, I hear the tinny sound of music being played on a phone. Oh no.

I join Callum at the front door where he is chatting to two tall, muscled Croatian guys. They’re happily settled in to the small hut space, and probably weren’t expecting visitors. We exchange looks with us, they exchange looks with them, and then we all exchange looks with each other. They turn off the music. Damn, these looks say, damn! I’m sure you’re all very nice people… But we thought it was ours. Ah well. Such is the way with free accommodation!

We soon all get over it, and make friends. They’re really nice. The shorter guy, Luca, is an engineer working in electric cars. Croatia apparently has the fastest electric cars in the world! He’s trying to make coffee out of a stove made from an old tin of beans. The taller guy is much quieter, spending his time cleaning his camera lenses and taking photographs. He has a truly tiny backpack. I’ve seen bigger ones on kindergarten kids.

The view from Ždrilo at dusk, looking out towards the sea.

And so we cluster together in the shelter for the night. Ždrilo was designed by an architect and built in 2015, so it’s very modern, with a working tap plus a solar-powered socket and two lights. We charge up all our broken devices, and they somehow seem… less broken. It’s warm and clean and wooden. Dinner is risotto with zucchini. I kind of hate risotto. But it’s pretty good.