You can always spot an abandoned house by its roof. It’s the first thing to go, or at least the first thing your can see from a distance. The terracotta tiles collapse inwards, leaving a gaping hole that grows until only the rough stone walls are left.

When you get a little closer, you start to notice other things: the door is gone, the shutters askew, the garden is overgrown (but not so much that you can’t see the shapes of old beds and trestles), and, peering though the broken windows, you see it’s been gutted. I’m not sure who does this, but every abandoned house has the same treatment. Strip it to the plaster, let time do the rest.

I’ve started looking for it. In Gračac, just about every second building was abandoned. Houses, shops, motels, petrol stations… It’s like someone came through and flipped a coin. The houses that are lived in often don’t look a whole lot better than the abandoned ones, but there’s those key signs of life – clothes hanging on the balcony, a pile of heavy logs waiting to be split, a dog barking from behind the house – which make all the difference. 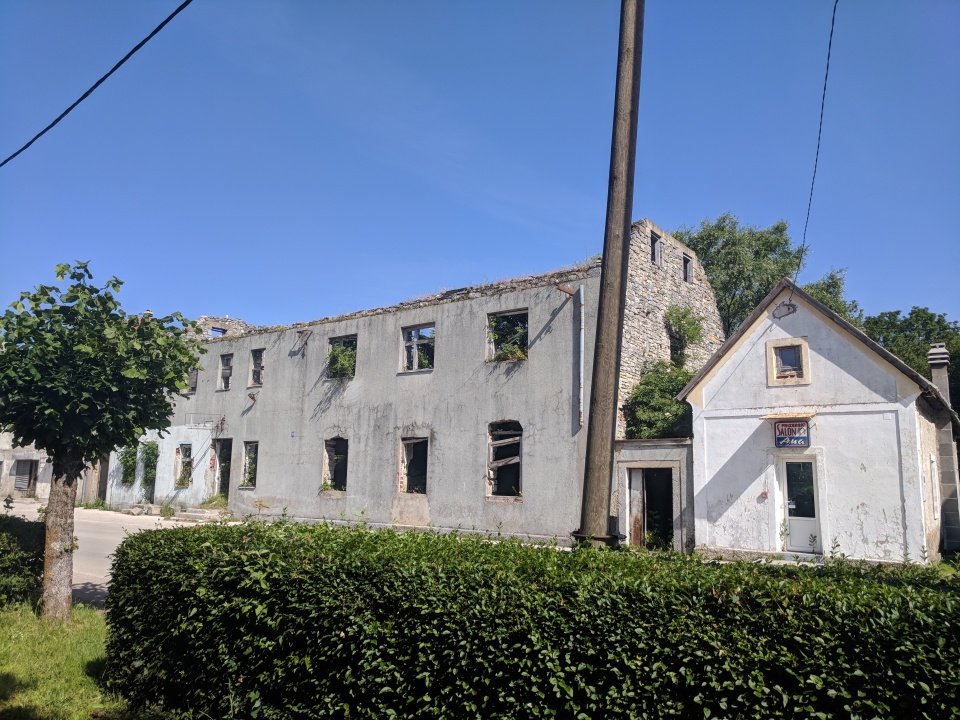 Only trees live in these buildings now.

It makes sense. Gračac was bombed heavily during World War II, and then got caught up in the Croatian War of Independence in the 90s. A lot of people fled the area, and it’s still in the slow process of recovery. But you can feel it coming back to life. 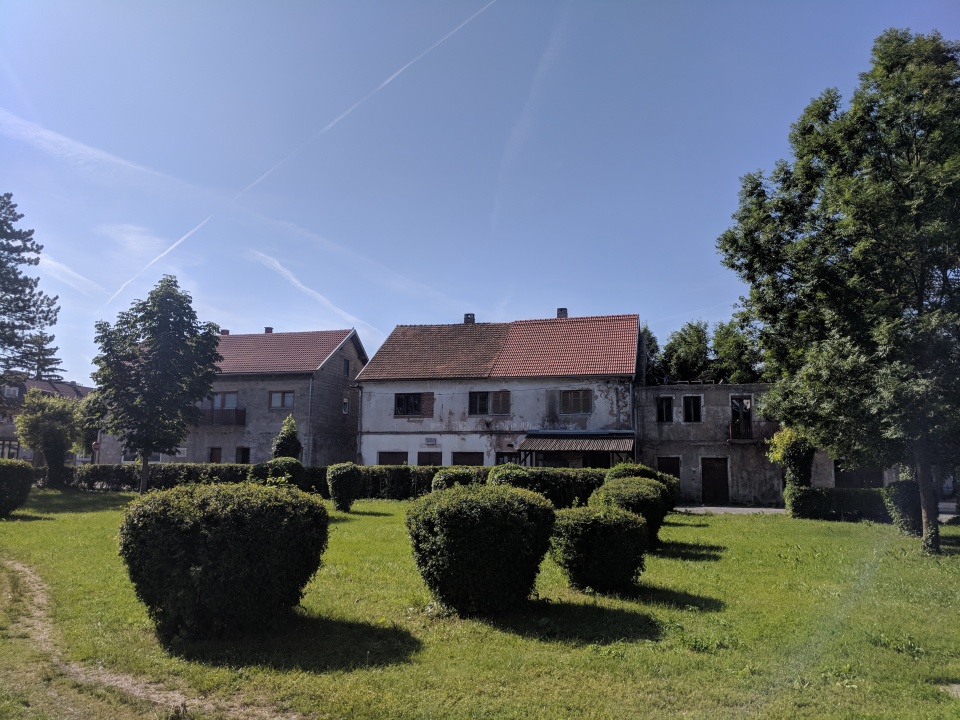 The park in the central Gračac is ringed by abandoned buildings such as these.

The same can’t be said for the villages we passed through today. We were road walking, striking out along the fifty-three kilometre stretch of highway from Gračac to the city of Knin. If you looked in any direction you could see mountains, but up close it was mostly just a gravel basin, broken up every now and then by a farm, or church, or a small town. I’d see the roofs in the distance, be hopeful there might be something there… and then notice the tell tale exposed scaffolding, the hint of green foliage through the hollow windows. We must have passed though four or five towns that were completely abandoned. The speed limit still slows, the bus still stops, and signs still tell you you’re in a town. But there’s nobody there. Not even squatters – more than enough abandoned buildings to go round. I guess, until a towns reaches some critical size, there’s just not enough to make it worth coming back for. 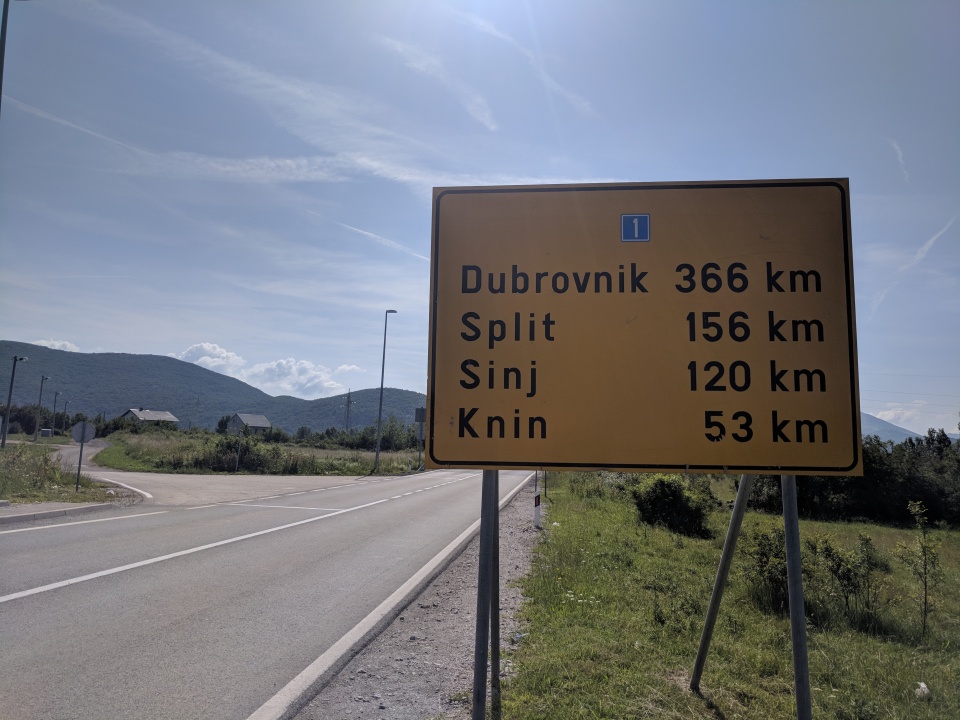 These abandoned towns and buildings have been growing ever more common as we head southwards in Croatia. I guess when people said the would still be signs of the conflict I thought they meant bullet holes and memorials, not ghost towns.

There is hope though. Every now and then you see a restored house, and it’s like an oasis. Almost without exception, these houses are incredibly well cared for, as if to make up for all the neglect surrounding them. But it all stops at the fence. It must be hard to live in one of these towns when you know what it used to be like. 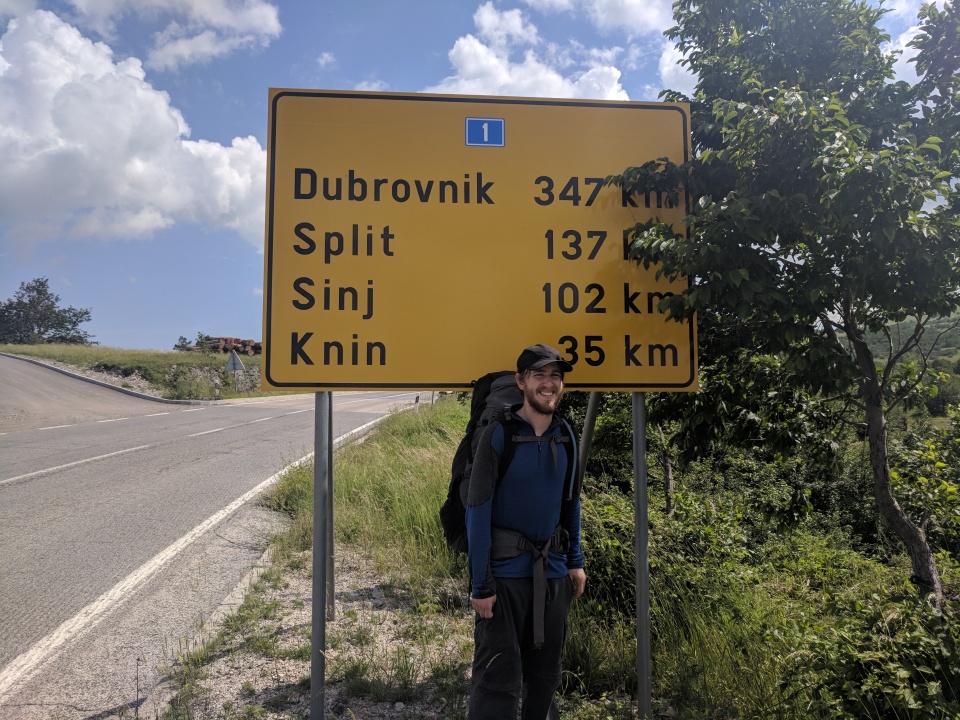 It’s these thoughts that occupied my day as we plodded along the road. The sun was hot, the shoulder thin, the cars fast, and the bitumen hard. Every now and then someone would beep at us; I think about half were friendly. We were in limbo. We still are – there’s another twenty-four kilometres to go – but it’s not as bad as you’d think. Nobody stops on these roads – why would they? – so hiking through here and sniffing around all these ruins really gives you a sense of being somewhere hidden. In a way out feels more adventurous than our usual hiking; everybody hikes those trails, but nobody walks these roads. 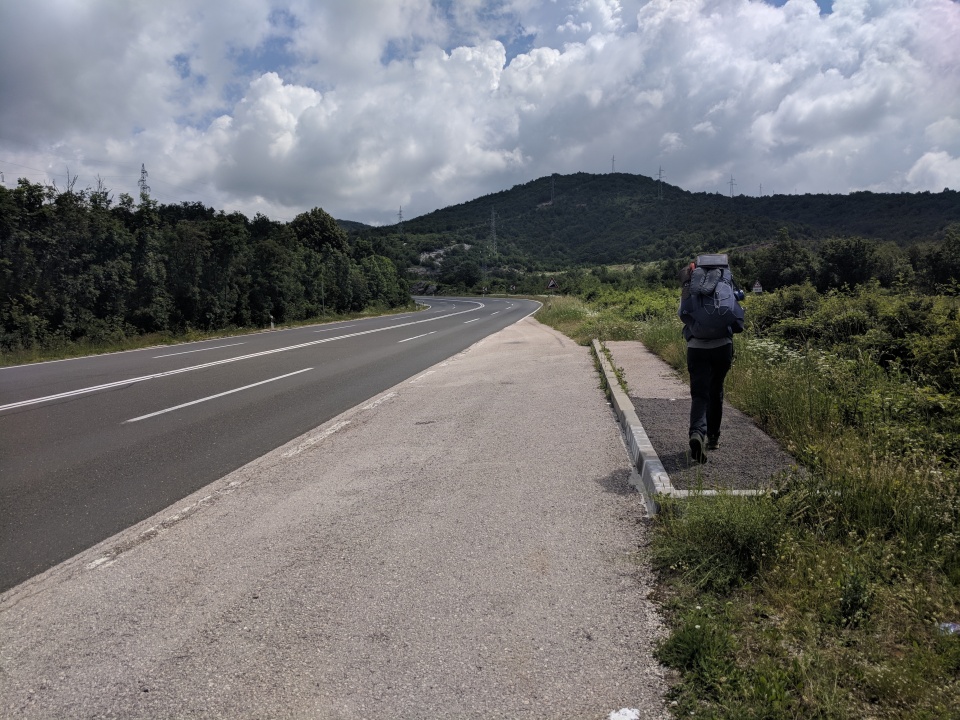 Kris enjoys the first bit of foot path we’ve had in six hours.

At kilometre twenty-nine we pulled over to a likely looking ruin, yanked off our boots, and called it a day. A little courtyard between four abandoned houses looked like a perfect place to camp, and we wasted no time settling in. But it’s a bit eerie. Eating beans and rice on someone’s abandoned doorstep, we can’t help but wonder what happened here. If this were Australia, an abandoned village like this would have a little placard, have it’s story written down. But here, there’s just so many of them. Too many stories to be remembered.

Start and end points: Gračac to the roadside near Prevjes (we walked the whole day and just camped when we needed to stop – below Most Kravlja Draga could be a better option)