Today was like one of those comic black and white films – perhaps a Chaplin – where everything moves in fast forward, and instead of dialogue there’s just a clanky piano playing circus tunes. The cops chase the robber through a door, the robber chases the cops through another, then they’re all being chased by a bear… you get the idea.

We started out in Brnaze, a town on the outskirts of Sinj, which over time has been absorbed into more of a suburb. Last night we were (kindly) deposited there by Željko, who not only paid for our hotel room, but also took us there in his car. It was the first vehicle we’d stepped into since starting the hike, so, naturally, we had to start the day by walking the three kilometres back along the road to where he picked us up (with our GPS off so nobody would know of our secret shame).

Safely back on course, we could begin the day’s hike proper. But the sun had been heavy, and the roads busy, so we grabbed a smoothie from the supermarket and watched the truly haphazard parking going on around us instead.

By 10 am we couldn’t put it off any more, and began to walk out of town – more or less in the same direction we’d just walked into it. A sign displaying a cycling map seemed to imply that there’d be some sort of idyllic, picnic table lined track by the river, so we pushed on quickly through dusty farm roads that, for whatever reason, seemed to literally be made out of rubbish. When we reached the river, however, what we found was simply more rutted tracks, but with the added menace of mosquitoes. “Ah!” we thought, “the beautiful track must be on the other side of the river.”

And that’s how I found myself wading through waist deep water at midday while Kris sat on the bank eating gummy lollies. After a lengthy consultation, we’d decided to conduct a test run to see if we’d be able to cross with packs on, but, unfortunately, all I discovered was that the water was paralyzingly cold. No river crossing today. 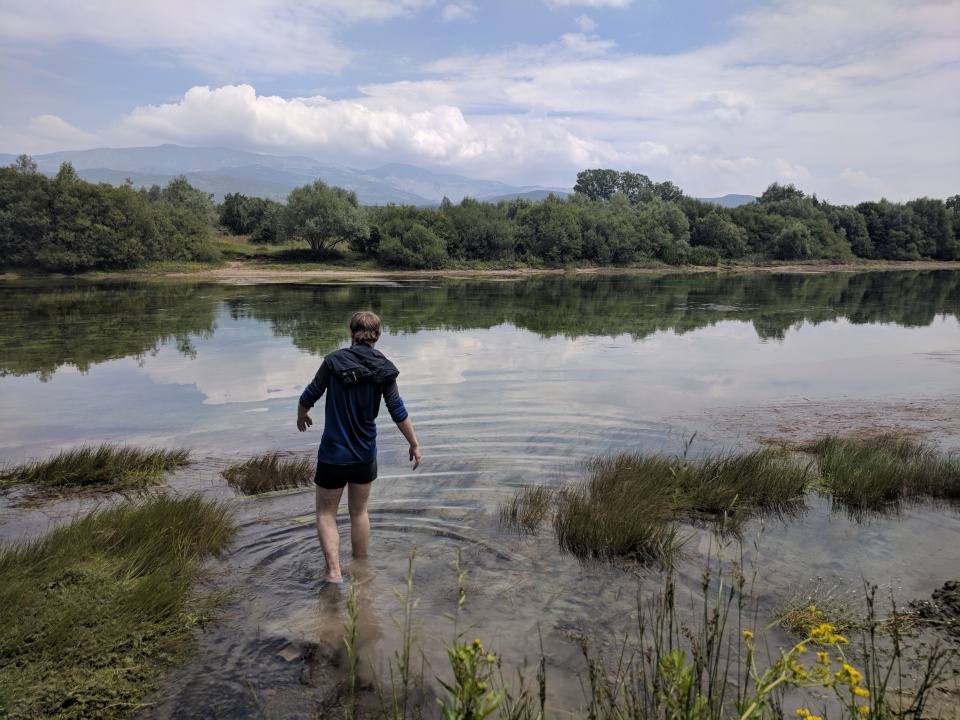 This is about as far as I got.

Luckily, walking around the corner revealed that we’d been about three-hundred metres from a bridge the whole time. Sigh.

Safely over the river, we found another copy of the cycle map. Turns out we’d been on the right side of the river earlier, we just had to walk a little further along. “Oh well,” we thought, “too late to go back now. This side’ll be just as good.”

As there was no track on that side, we either had to go the long way around – through the town of Otok – or else we could try bush bashing along the river for five-hundred metres until a track started. There were some likely looking four-wheel drive tracks which we followed through increasingly dense scrub until, just before the we reached the promised trail, we hit a wide canal, unmarked on our maps. The water was stagnant, swampy and smelly – I had no desire to try another crossing. So back we went. Despite all our backtracking efforts this morning, it seemed we wouldn’t be ending up with nice GPS tracks after all.

And so by 2 pm we found ourselves in the village of Otok. It was a low point: Kris’s back was aching, my shoes were full of stones, it had taken almost two hours to travel a kilometre, and we had another seventeen to go. Sitting on the concrete wall by someone’s house, we decide to have lunch. 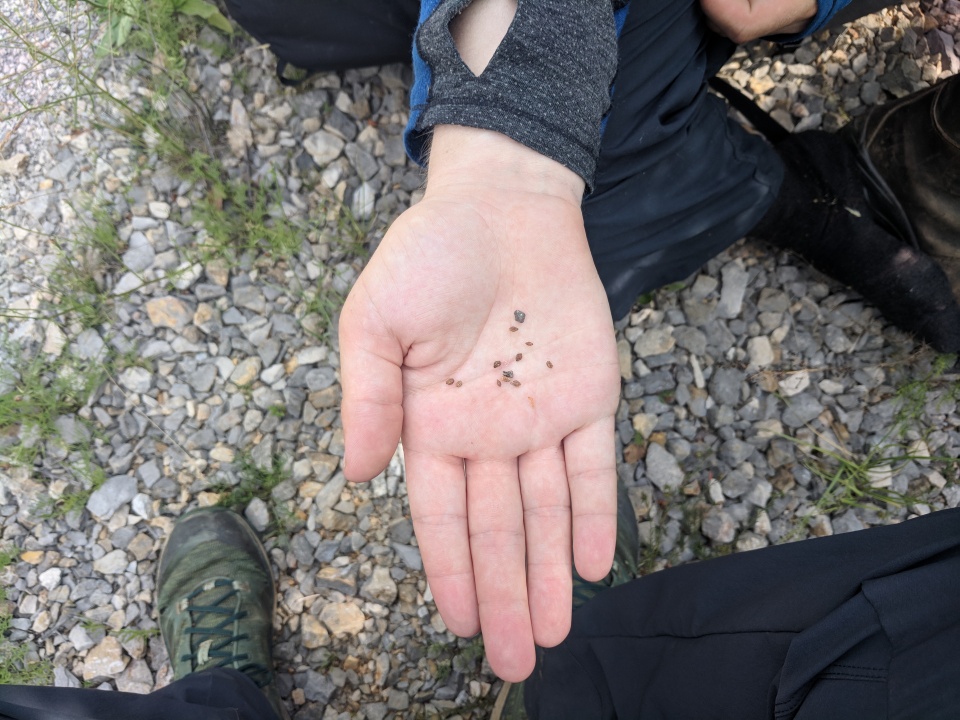 The small collection of rocks I walked on for about five kilometres before finally admitting that they were a problem.

We were just tucking into our sandwiches when something miraculous happened. An old white sedan pulled up beside us. I was sure it was going to be the owner of the house telling is to hop along when an old man rolled down the window and said something to us in Croatian. I’m not sure what he said, but it was clearly friendly.

“Ah,” says the man. Then, after a moments’ thought, “Catholic?” (I should mention it’s a Sunday.)

We shake our heads.

He doesn’t seem phased. He ushers us over, and passes us a bag through the window. Inside is a loaf of bread, four tomatoes, a bottle of soda water, and a slab of wrapped pork. It takes a moment to sink in: this food is for us!

It’s almost impossible refuse food here, but, both being vegetarian, we couldn’t take the pork. After many exclamations of “vegetarijanac” and much shaking of head, Kris managed to give the pork back to the man. He then offered it directly to me, to see if I would be any more sensible, but of course, I could only echo Kris’s apologies. Reluctantly he took back the meat, and drove off, leaving us a little bewildered. Was this a religious thing, or a random act of kindness to some sad looking hikers (very possible)? In any case, it boosted both our lunch and our spirits, and, after a little snooze in the shade, we pushed on, a little happier than before. With Željko last night, and now this kindly stranger, it really hits home how generous the people are here.

For the rest of the day we were following the Our Lady of Sinj pilgrimage route that leads onwards into Bosnia and Herzegovina. We’d finally escaped the sticky suburbs of Sinj, and were heading up into the mountains again, following windy roads through tiny hamlets.

Road walking, whilst easy in some senses, really punishes your feet. With every step I was painfully aware of my foot bones pushing into the inflexible asphalt. The sunshine had given way to ebbs of rain, so there wasn’t much chance for breaks, and it was a weary pair of legs that finally crawled into a picnic shelter in the tiny town of Ljut which was our home for the night. Kris set up a line to air our smelly hiking clothes while I made dinner. 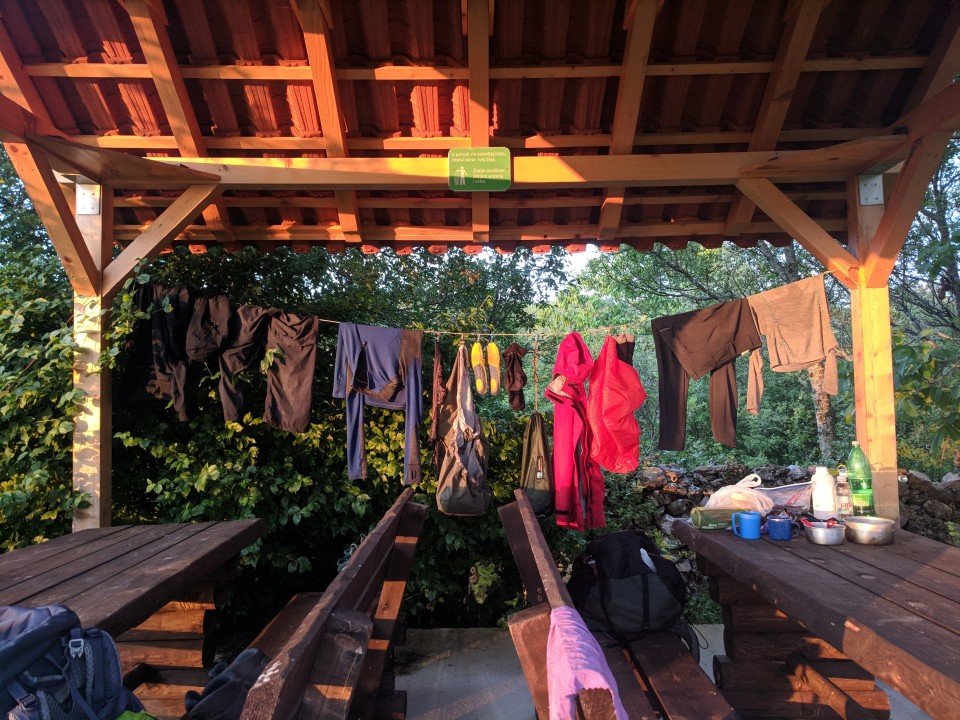 Yet another masterpiece by Kristen Perry. This clothes line, she tells me proudly, uses a bowline, a slip knot, a reef knot, sheet bend, and, her favourite, a rolling hitch.

It’s my birthday tomorrow, so I sat and watched the sunset pensively, thinking of how I’d spent the last year. It seems unbelievable that we’ve been traveling for over seven months now – moving around has become routine. We’ve got another two months to go, and it’s easy to let it fly past without appreciating it. But that’s easy to think, and harder to practice. Anyway, the sunset is nice, and tomorrow we go to Bosnia! I’m very excited. 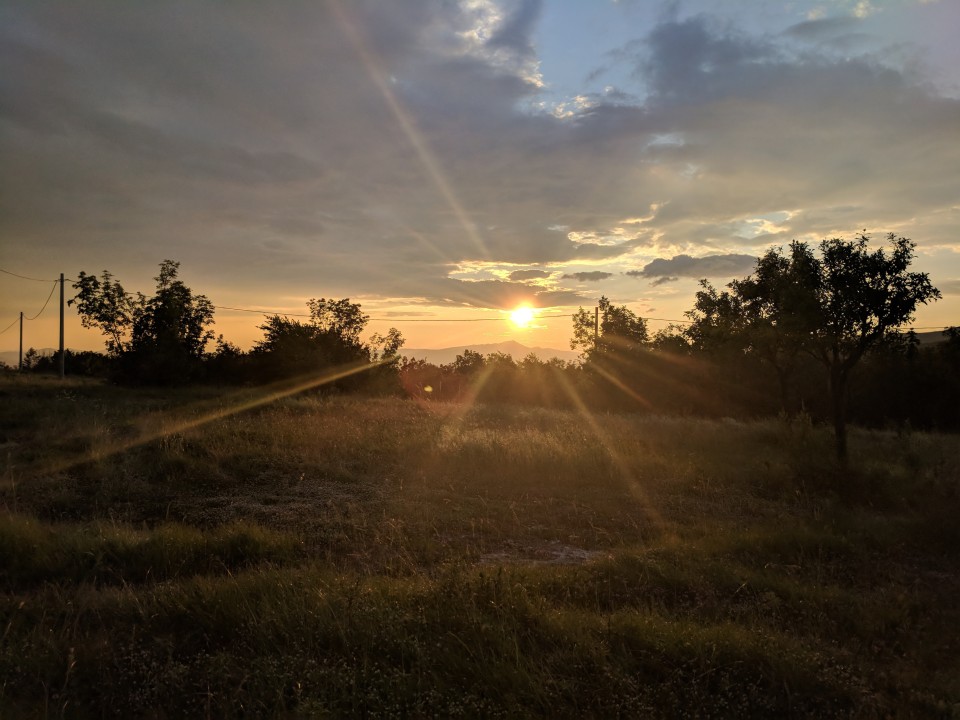 The sun sets over our campsite.

Start and end points: Sinj to a field with a picnic shelter in Ljut

Features: Supermarkets in Sinj (Super Konzum, Kaufland, LIDL, Tommy Hypermart, so, so many others) – Sinjsko polje – Mini markets in Grab (NK, possibly others)