Were I to draw an elevation profile of the Via Dinarica, and lay it out beside me, I can only imagine that it would match the ground we slept on last night. We camped on the side of a mountain, so there were two certainties we could rely on: that we’d have an uncomfortable night, and that three-hundred metres up the track there’d surely be a site that was infinitely better. Both, we discovered this morning, were true.

And so it was a pair of sore backs which climbed slowly up from our campsite further into Lib mountain, aiming for the ridge that loomed some five-hundred metres above. After scaling so many mountains in recent weeks (that elevation profile could only look smooth by virtue of having too many bumps, as does the Earth) hills have stopped being too much of a hindrance; they slow us down, but don’t really tire us out too much. 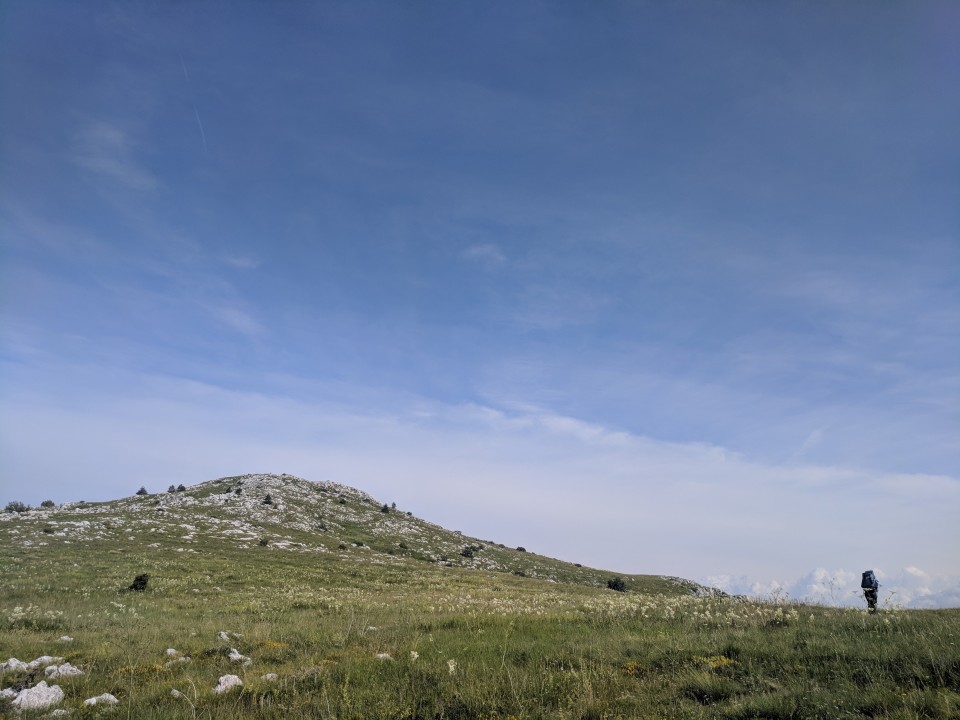 The ridge, when we arrived, was broad, with stunning views over the villages of Duvanjsko polje, Buško jezero, and the Croatian mountains beyond. Given a pen, it seemed we could trace the line of our last few days of walking, all in this one view. There was no discernible path on the ridge, but it was lovely, traipsing over the slight limestone peaks that poked out every few hundred metres. The ridge seemed flat, but we must have been tending upwards, because only the last of these peaks has a name: Orlov kuk, which stands at a modest 1023 m. There the mountain drops away sharply to some village in the valley below, and we rested for a while, watching cars drift along the streets with our birds-eye view. I vaguely wondered if, by analysing the traffic patterns, I’d be able to spot some suspiciously behaving murderer, like in that Hitchcock film Rear Window. But we left before I made much headway on the case. 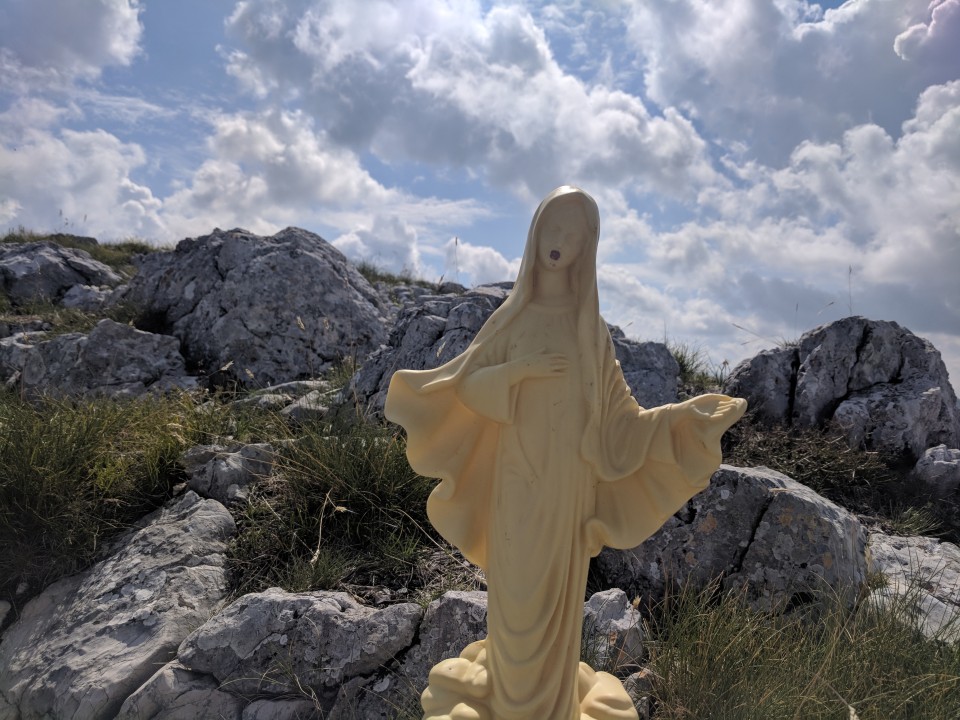 Somebody gave Mary some lipstick.

From Orlov kuk we descended steeply into a side-valley adorned with a picnic table and spring. This, it seemed, was the fabled campsite we’d aimed for – and missed – last night. The was no chance of us getting this far though; yesterday was long enough already. We paused to fill out water bottles at the spring, and to eat some biscuits in the weak sunshine, before heading along an old mountain trail towards our second peak of the day, Svinjar.

I know we’ve complained about them a lot, but the red and white dots which mark hiking trails in this part of the world can really be infuriating. When they’re good they’re great, but having a heavily faded mark on some obscure rock every hundred metres can make the trail harder to follow than if we just used a map: you have to pause every few minutes to scour the scenery for the next marker, making dense forests slow going. So it was after lunch when we finally arrived at Svinjar peak, and by then the sky had broken open to pour its cold rain down on us. We didn’t linger – all we could see was fog.

We didn’t have much idea of where we were going to camp today. Theoretically we were going to pass through two villages – Omar and Omrcenica – but it wasn’t entirely clear where (or even if) they were. So it was with a vague sense of uncertainty that we trudged along the forestry roads which comprised the final section of today’s walk. Just as we were starting to give up hope, the track broke out into a tiny hamlet – just three little houses on a field. Could this be Omar? We weren’t sure, and I’m still not sure (EDIT: Am now sure. It was Omar.). But the field was flat, and there was a well, so we gratefully set up camp outside the least disheveled hut.

In a gap in the rain, we decided to have a little sniff round. The hamlet seemed to be abandoned, and all three huts were unlocked. The first was a rotting mess, with mouldy plaster on the floor and water leaking through the roof; the second was a straw filled barn; and the third seemed like a little artist’s cottage, with a broken stove and paintings on the walls.

The weather was growing ever worse, so we huddled inside the cottage to make dinner. Once you got over the broken furniture, it was quite comfy and surprisingly clean. In fact it was so nice that we’re still here, and the wind outside is starting to howl fiercely (sorry tent). With a chair propped to keep the door closed, it’s certainly much visit in here. It might be hard to leave this cottage.

The cosy cottage, safe from the howling winds.

Tomorrow we climb Vran, whose slopes we edged onto this afternoon. Hopefully the weather clears up by then. For now, I’m going to go wring out my socks.

Start and end points: Slopes of Orlov kuk on Lib mountain to Omar (a small group of huts (some abandoned) before Omrcenica below Vran mountain)