I fell asleep slowly last night in a contented drowse. Outside the little shelter, from behind the small, rectangular window, I could see a single tree in the foreground against a sea of thousands more, above which the grey sky unfurled like a bruise. The single tree was lashed sideways by wind and rain as I lay there, unassailed by even a draft. My eyes would close, but sure enough I would open them again, just to see out.

This morning it is still windy, but thankfully the rain has gone. We are so cosy inside this little place. I have breakfast in my sleeping bag.

Today we climb the Vran family mountains. Some excellent hiking awaits! We’ll skip over the little beb, Vranić, and instead head straight for Mali Vran (Small Vran), strike out along the ridge to summit Vran himself and then make the last pitch over to the big daddy, Veliki Vran (Great Vran). Well-marked foot tracks the whole way, no roads to speak of; a good hard days walk in the hills, with the famous Hajducke Vrleti Motel (read food) waiting at the end of it – what more could you want?

For reasons which escape me however, Veliki Vran, the highest and arguably most inspiring mountain in this massif, is not on the official route – the Via Dinarica instead heads down after summiting Vran, towards a lake, Blidinje jezero. Vran mountain is famous because the hajduk whose monument we visited the other day, Mijat Tomić, hid out in a cave at the base of it while being pursued by the Ottomans back in the 1600s. Veliki Vran is not so famous as his little brother. We’ve had to edit the route a little bit to include him, but our maps show a good track off Veliki which leads past the famous motel and eventually to a little place called Masna Luka. There’s a new mountain hut in Masna Luka which will be closed, but we plan to camp outside.

After leaving the abandoned hamlet presumed to be Omar (wishing we had the guide book at this point…), we pass Omrcenica and head directly for Mali Vran. It’s a steep track, but really nicely made and well-dotted. We keep up a good pace as the woodlands disappear, replaced by dwarf pines, which cluster in thick, impenetrable masses towards the top of these hills. The path has sometimes been hacked through these grovelling pines, meaning we follow a trail of stumps.

A sign points us uphill to Mali Vran, our first mountain, and Mali Pećina, a small cave on the mountainside which we won’t visit.

After about 500 m of climbing, we reach the ridge. The dwarf pines are not so thick here. Instead, we see limestone outcrops and tufts of alpine grass. The weather is fine but the winds threaten to blow us off the top, so we hunch over and make our way slowly to Mali Vran. When we get there, it’s very scrubbly. There’s not even a stick to mark it! But we don’t mind. The view is beautiful, the walking supreme and we have some bigger fish to admire.

Four kilometres onwards, up and down the blowy ridge, we reach Vran. At 2027 m and with a pleasing conical shape, it’s quite impressive, but hard to appreciate from up so close. 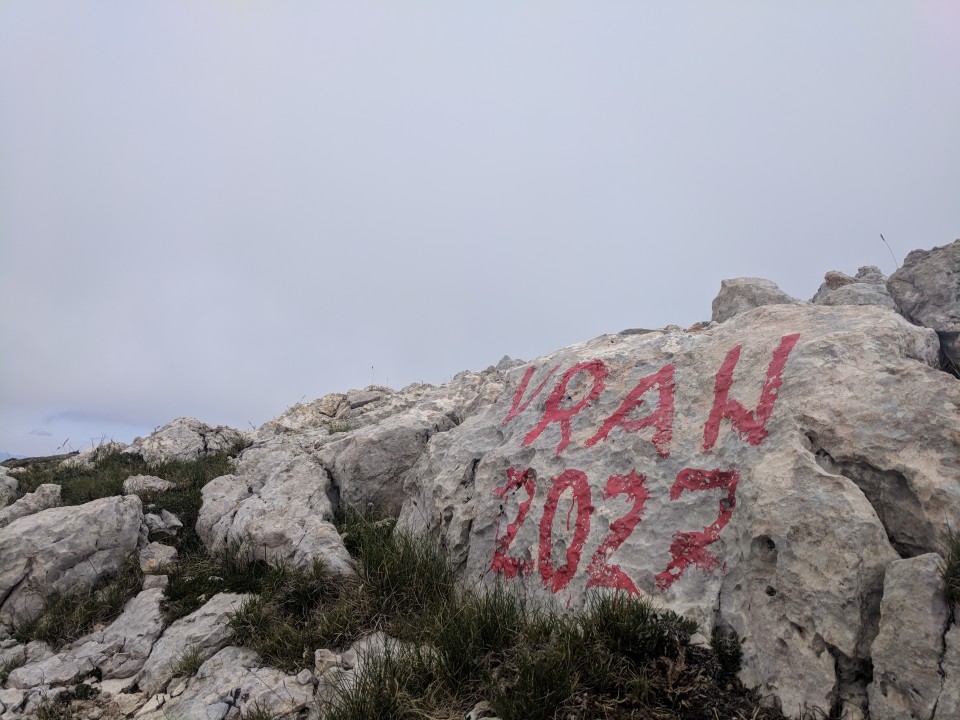 The view from Vran shows the official Via Dinarica route down towards Blidinje jezero in the distance. We’ll continue along the ridge to summit Veliki Vran before heading down a different route.

A sign just past the summit points to Veliki Vran and declares it to be 3 hours away. We almost balk – 3 hours to walk 2.9 km?! But the time estimates are often quite generous here, so we nibble our last remaining squares of chocolate and head off.

The track just past Vran is a different beast – more technical, steeper, with lots of scree. But it’s a really nice walk. It funnels us into tiny grassy corridors between the dwarf pines, where I imagine the snow drifts settle and slide down like miniature glaciers. After a while, having come up and over the small peak of Bijela glava (for some reason not good enough for the family name), the track mellows and we swan along through flat grassy meadows. A few more hundred metres and I’m at the summit!

It’s a fantastic place. This is a mountain where you really know you’re at the top, you feel it in your whole body. We can see for miles around us. I’m really glad we came here.

It should just be a short, sweet and steep hike down the side of the mountain to the motel. The track markers point off in the right direction and there shouldn’t be any other tracks up here according to our map. We start flying down the ridge. Callum is much faster going downhill than I, so we bid farewell and he spurs on ahead as I amble down more slowly, still managing to slip and fall a couple of times (I get a tiny bruise on my eyebrow from the warped, lumpy trunk of a dwarf pine – add that to my list of ailments).

I’m trying to not get too far behind, so it’s a little while before I pull out the map and check we’re on course. The path we’re following is well-marked and well-walked, so I’m not too concerned, except for the fact we seem to be drifting a little further north than I was anticipating. But the tracks are not always exact, so we’re probably fine…

We’re not fine. Way, way off-track and no longer, it seems, heading for the road and the motel.

I coo-ee in vain to Callum ahead for a while and try to catch him up. We must have descended over 400 m by now; there’s no way we’re climbing back up to find the right track. My shoes, still being wet from yesterday, have rubbed little ulcers onto the tops of my toes and my eyebrow and back still hurt. Please no, my body says. Not back up again.

Finally my coo-ee is answered. I see Callum sitting on a log across the valley. He’s stopped because he’d had some doubts about the track too, especially when it started heading back uphill. I yell at him that we’re off course and head over.

We have no idea where this mysterious track goes – over another peak? To a distant mountain hut? Back north-west to the other side of the ridge we’ve spent all day traversing? We have no idea. But I really don’t want to climb back up the hill, and there’s a chance it might just pop us out a bit further up the road from where we intended… So we just keep following, happy when it points downhill in the right direction and fretting whenever it goes wrong.

We escape from dwarf pines and trees into a meadow, past which the path looks like it really will take us where we want to go! I start to enjoy the walk again – it’s a very well-made track, a gentler gradient than we would have had on our intended route, and it’s probably going to take us past a necropolis from the middle ages, down beside the main road. Perhaps this has been a fortuitous discovery, a little piece of serendipity.

We emerge onto the road tired but happy with our find. It’s a great route down from Veliki Vran, and I’d recommend it to anyone. A few minutes later we reach the roadside necropolis, which is a beautiful jumble of old engraved tombstones.

An engraving on one of the tombstones at the necropolis, believed to be a winged horse with a snake in its mouth. 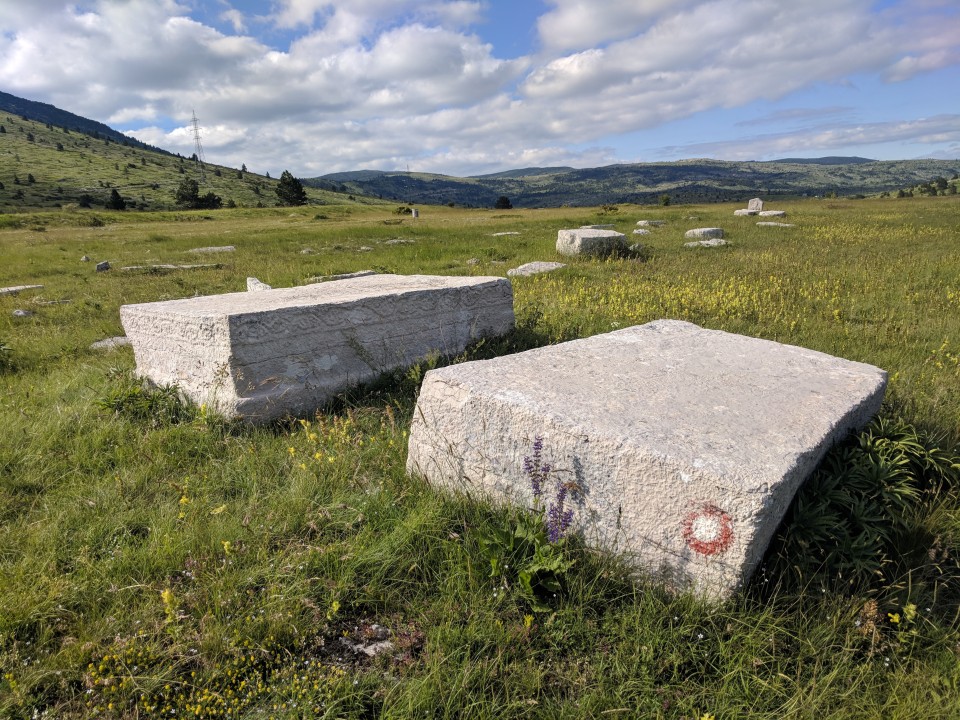 Shameless!! A marker dot on one of the tombstones. And I though the wind farm dots were slightly irreverent…

A few more kilometres and we finally come to the motel, Hajducke Vrelti. It’s been a slightly longer afternoon than intended and I’m definitely hungry and ready for a rest. I hope it’s going to be vegetarian friendly. It’s popular as a provider of local specialties, most importantly lamb, so I’m not sure what we’ll find.

This restaurant is also famous for another reason – the fact that it exists within, and was the sole creator of, a minuscule micro-nation called Hajdučka Republika Mijata Tomića. That’s right. The motel is a tiny country. Only three square kilometres. The head of state is just the motel owner! They even have, apparently, their own currency, 73 ministries and a flag. There is one strict policy – no dealing with politics or forming of political parties is allowed (it’s not good for human health).

The story goes that the motel rests on the boundaries of three different municipalities, none of which wanted to take responsibility for the restaurants ongoing power supply problems. Thus, in 2002, the motel owner took matters into their own hands and set about creating the micro-nation, named after their local hero, Mijat Tomić. Somehow, it was successful! When the micro-nation was declared, the Stabilisation Force in Bosnia and Herzegovina, a national peacekeeping body deployed after the Bosnian War, came down to make sure it wasn’t some kind of destabilising bid for power. They must have been glad to see it was all in fun! And, I presume, it must have resolved the power supply issues, which is good for us, and the strong crowd of locals and tourists filling up the other tables. The food is definitely vegetarian friendly – roast potatoes, cooked barely, šopska salad and a delicious thing made with onions and capsicum. It’s so tasty and warm. It’s not until 7:30 that we finally admit that we should get to camp, take up our packs and head off into the pale evening light.

It’s just a short pitch across the roads to Masna Luka. We find the new mountain hut, closed as expected, and are very happy to see a camping area across the road from it, with a freshwater spring, flat grassy patches and picnic tables. The tent goes up quickly and it’s lovely to be able to hop into bed for once without making dinner.

The hiking today, over the Vrans, has been so good. If you had just one day to hike the mountains of Bosnia, this wouldn’t be a bad bet. I feel like we’re in the right place, like this really is the best route the track could have led us down. And tomorrow we take on Čvrsnica mountain, which may be even better. It’s a good feeling.

Looking up from our camp at Masna Luka to the moon rising over Čvrsnica mountain (which we’ll climb tomorrow).