We wake to bill shock.

It’s not a pleasant feeling, especially when you’re on a budget. The most expensive place we’ve been to so far has been about 40€ for a bed, breakfast and dinner, but most of the time it hovers below 30. Nowhere so far has really had a huge tourist inflation. So at the Eko Dom and Katun on Trešnjevik, we don’t check how much the room is, or anything else. When the bill comes out at 92€, including 26€ per person for a single bed (not including breakfast), I’m slightly horrified. I’ve gotten so used to the incredible hospitality around the Balkans that I never even knew you could buy rakia, the homemade brandy made from plums and apples and other fruits – but apparently, here, that’s how it’s done. I don’t feel angry or outraged or cheated or anything; I know I have no right to be. This is how normal places work. The experience just feels a little more hollow and less warm, for the reminder that we’re tourists and nothing is complimentary.

We walk away from Trešnjevik still shocked, talking about the place and trying to understand whether our emotions are justified or not. My expectations of the Balkans have been so far surpassed thus far that this return to what is essentially normality seems completely incongruous. 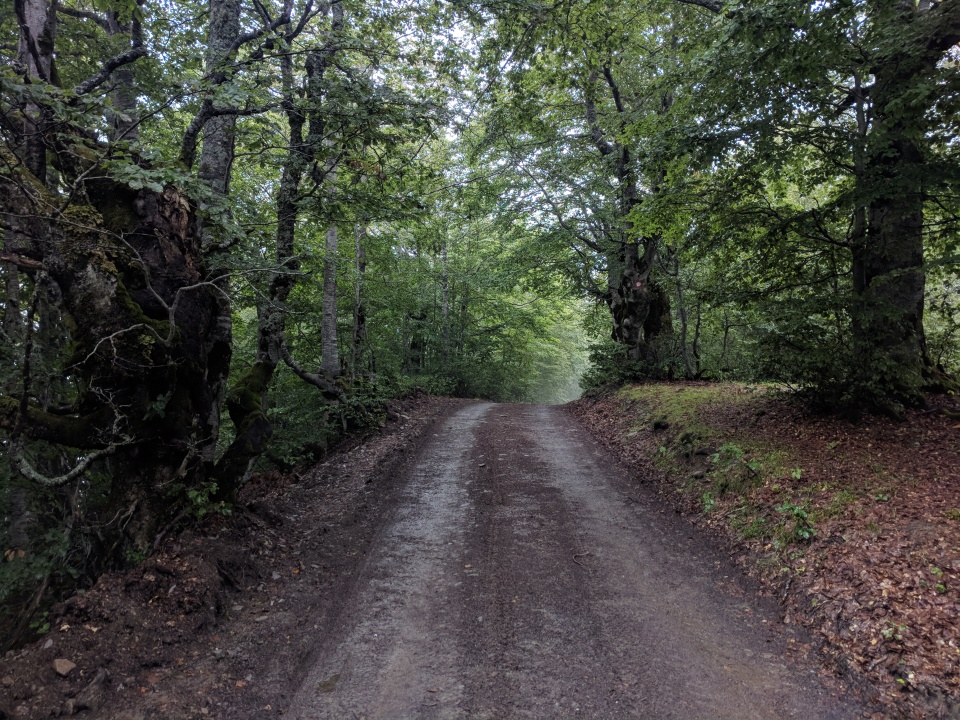 After my success making friends with horses yesterday, I try my luck with this cow. It has a little sniff and then bolts. Ah well.

The rain is still threatening this morning as we approach the mountain range just south of Trešnjevik, Komovi. Like a smaller version of Durmitor, Komovi is an impressive massif with some big, rocky peaks, but a little less busy, especially in the cold drizzle of today. Tonight we’ll aim for a hillside just past Sumor jezero, nearby to a small, Orthodox Catholic church called Crkva Svetog Ilije, which was once the highest church in Europe.

The route to the mountain is simply a dirt road, and we make quick progress through some small settlements. Past here, though, the route becomes a thin, slippery single track seemingly made out of nothing, clinging to the side of the mountain on a spurious collection of small rocks, tree roots and mud. It’s only a short traverse, 2 km or so, but it takes a while. On the really gnarly parts, I take handfuls of grass, digging my fingernails into the dirt beneath as I sidle round. A fall here would not end well. Carefully toeing down the mud and stepping over or crawling under fallen trees takes constant attention, so by the time we reach the valley, I’m exhausted. 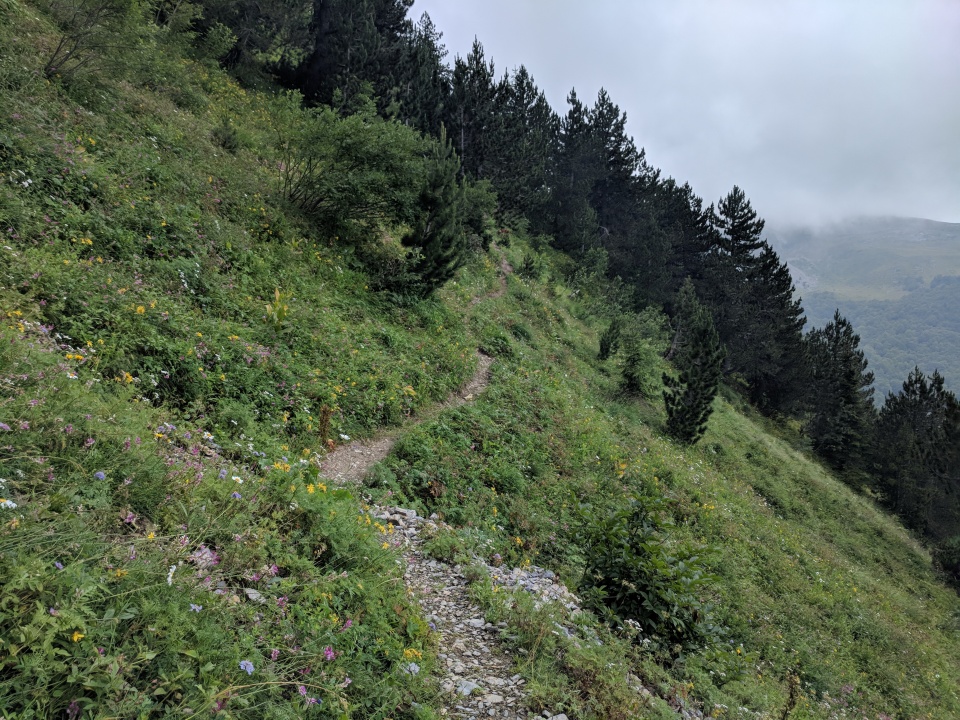 The track is small but deceptively good at first before becoming significantly more tenuous.

Yes, this is the same track.

After a rest to recover my nerves, we head up a high valley towards the big peak of today, Kom Kučki. At 2487 m, it’s the highest peak of Komovi, a huge, high lump of rock which should look fairly imposing. As we steadily gain altitude towards the rocky pass from where the side-track leaves however, the clouds descend into a thick fog and the wind picks up, hiding the peak from view. Mist churns out of the valleys, shrouding the world like a pale, chilling dust storm. I can’t see anything. We press on more slowly.

The rocky pass near Kom Kučki has been fortified by a few ramshackle rock walls. Clearly a site of many a lunch stop but unfortunately also a wind tunnel, we huddle behind a wall and make wraps before the climb. We have the last of the ajvar, smoky and delicious, with fresh onion, cucumber and green paprika. Man, it just makes lunch so much better.

Huddling up in the rocks after lunch, just before we climb Kom Kučki.

We literally cannot see more than ten metres in front of us, so we debate for a time whether it’ll be safe to climb the peak. We decide to go for it – we can always turn back if it looks hairy – and begin following the (thankfully) well-marked path up through the alpine grass.

It’s a bit of a scramble in parts, but generally pretty easy. Although grassy at first, it soon shifts to bare rock. The dark grey rock has been sledged into rectilinear shapes, many of which have slipped from their slots down to the foothills below. One section of the ridge feels quite exposed, but it’s a total whiteout and we see nothing. At the summit, it’s just the same. Only a pile of rocks tells us we’ve reached the highest point. We hang around for a bit, signing the log book and hoping to see something of the beautiful, green mountain range surrounding us… but it’s not meant to be. Ah well! We head down. 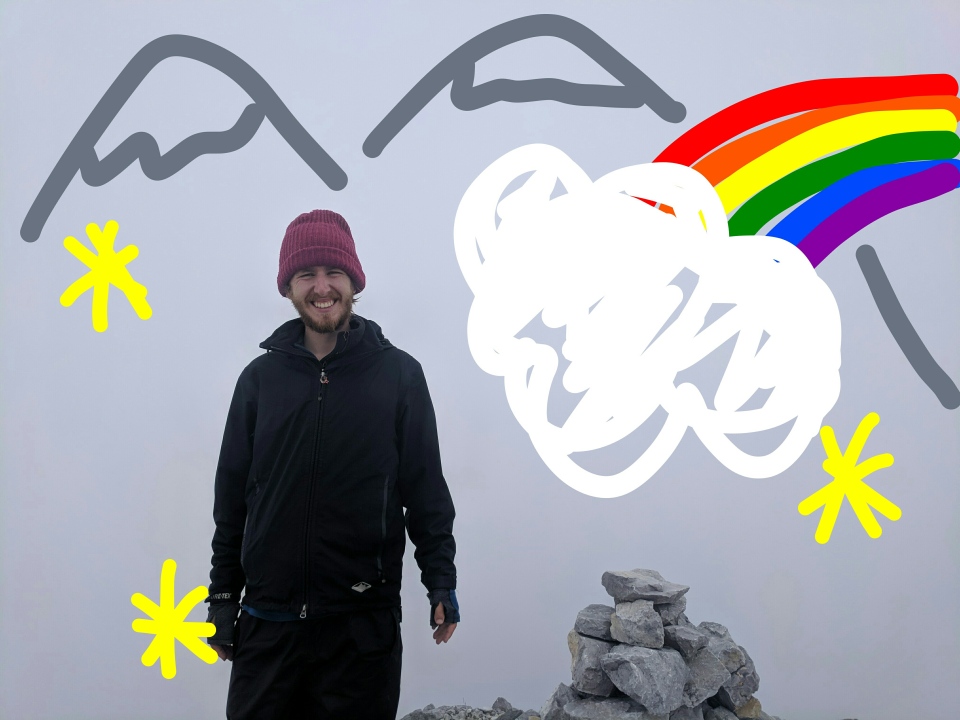 Callum at the summit of Kom Kučki! What a magical view…

Despite my best attempts to achieve grace and elegance while climbing down things, I always seem to end up looking like a starfish.

The exposed section of ridge just beneath the summit – I guess it’s probably good that I can’t see the bottom? 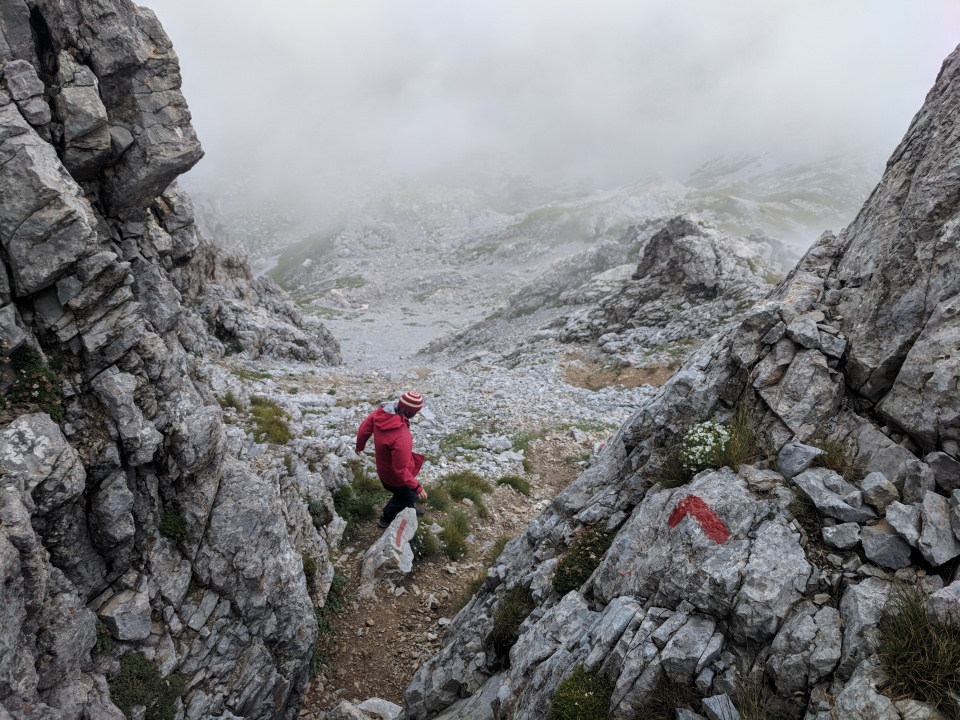 The clouds become a little less dense as we descend.

As we descend however, the clouds finally begin to thin, allowing me to see how quickly they’ve been moving the whole time. The grass, which all day has seemed washed-out, suddenly becomes luminous for a few moments, much greener than I could have imagined, before the mist quickly floods back in. I’m constantly turning back to see if I can see Kom Kučki, but clouds stubbornly cling to it, forming a woolly thimble over the giant thumb of the peak.

Eventually, we’ve descended all we can from the mountain, and are washed up on a mercifully flat vehicle track by Carine katun, a little abandoned settlement where a sklonište-type shelter is present – Carine koliba. We poke our heads in but, although lovely from the outside, inside it’s windowless, dark and stuffy. We could stay here the night, but neither of us really want to. Besides, we have a lake to reach! So we head off along the vehicle track, making good progress for the first time since this morning.

A glimpse of what Komovi really looks like. The colours are just incredibly beautiful.

Thankfully the clouds stay clinging to the mountains behind us, and the early evening becomes gently sunny and warm, the grass like green-gold wheat. The only problem is the wind, which has picked up significantly since we left the sheltered mountain valleys. We reach the disused church, Crkva Svetog Ilije, at Sumor in a beautiful, pink-gold light. A few empty shepherd huts are sprinkled in the valley below, and there’s a wooden picnic table – other than that, the scene is deserted. It’s breathtaking, but the wind remains deceptively fierce. We investigate the nearby Sumor jezero for a campsite, but nowhere on its banks is there shelter from the onslaught. We turn hesitantly back to the church. 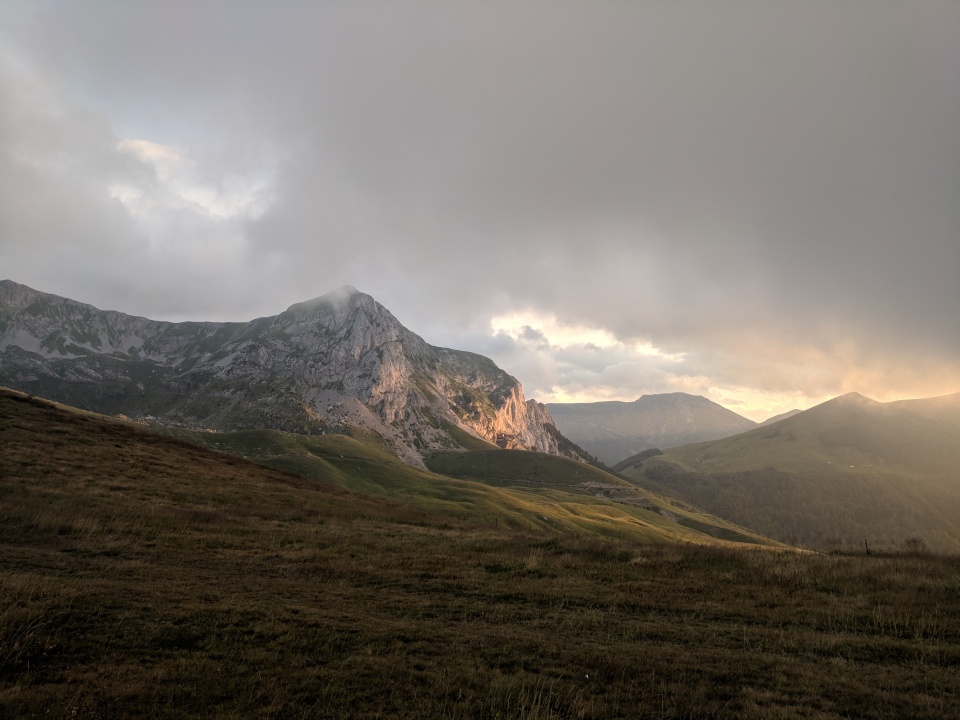 Beautiful mountains south of the church in the late evening light.

Inside it’s warm and musty. A single, concrete room with a small altar, a Bible, a collection pan filled with small change in many currencies and a hiker’s logbook. On the walls are huge paintings of biblical scenes. The logbook is coated in a thin veil of dust, as is everything else in the room. Eventually we decide that spreading our sleeping bags and quietly staying the night here wouldn’t be so sacrilegious. The church feels like a refuge, and despite the fact that neither Callum nor I are religious, I feel almost welcome. It’s similar to the sensation I feel when settled in a public library; a place for like-minded people to come and quietly, respectfully, go about their business.

The wind surges back and forth all evening and well into the night, battering the tiny church like a stormy sea swelling and rushing over a lighthouse. I feel so safe and warm inside. What incredible and beautiful things I have seen today. I carry a small candle for situations like this, so we burn it late into the night, watching the church walls flicker as the world storms outside.