Yesterday, Kris radically changed the face of bushnuts by having four photos in a row.

Naturally, I now have be to one-up her, so today’s blog post will be presented through the medium of a slide show.

Sorry if it takes a while to load.

Overnight the clouds came back, isolating the church in a thick, grey blanket. Standing in the doorway this morning, I couldn’t see the mountains, though I knew they weren’t far away.

I slept surprisingly well, despite feeling like an intruder. I guess, in contrast to our first night slept under a church awning way back on day one, the church felt truly secluded. Being protected by a gale didn’t hurt either.

Kris found a new hat in some wet grass yesterday. She tried it out as we finished getting ready.

There was no water at the church, so we left with empty bottles (and light packs). Luckily we found this nice spring a kilometre down the road. I’m going to miss these handy little things when we get home. They seem almost too good to be true – clean, chilled water just jumping out of the mountains.

This road is the official Via Dinarica route, leading directly into Albania. Despite looking good here, the track apparently becomes horrendous later on, so we’re taking a different route via Maglič peak and Rikavačko jezero. It’ll add a day to the hike. 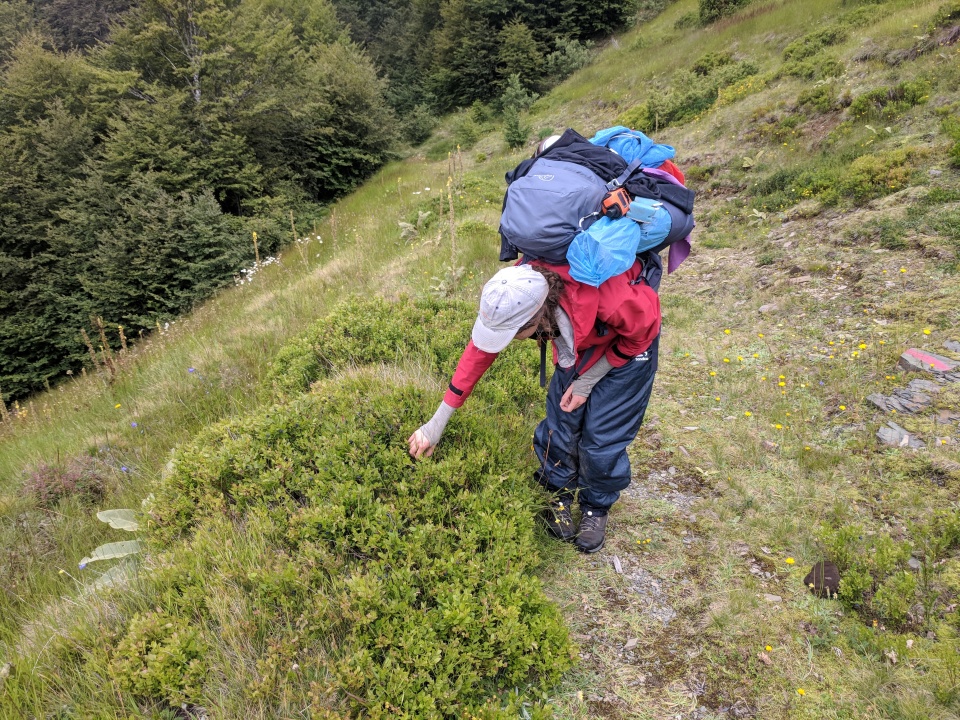 Stopping to pick some wild blueberries on our way up Maglič. 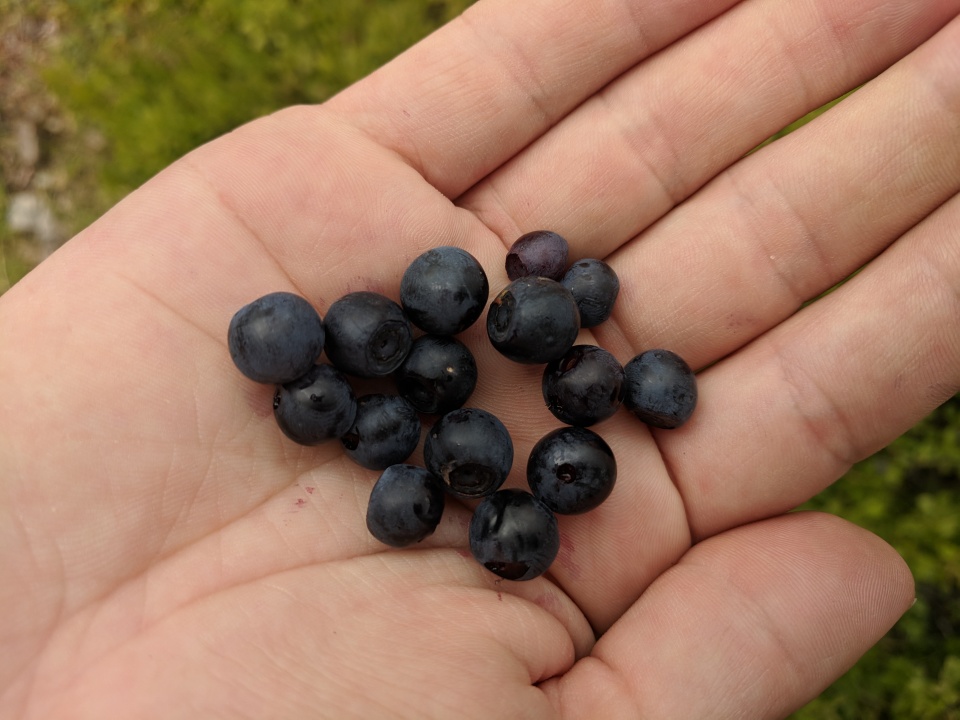 Mmmmm, these are definitely another thing I’ll miss. 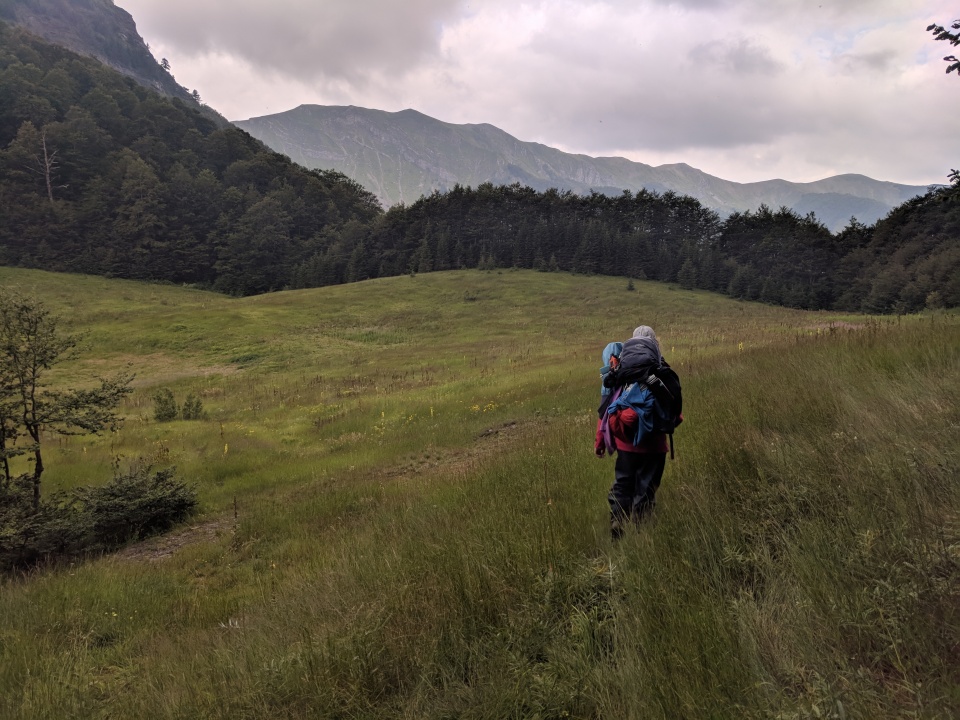 Crossing this little field it started to rain, with sparse but heavy drops so you could hear each one hitting the ground individually. 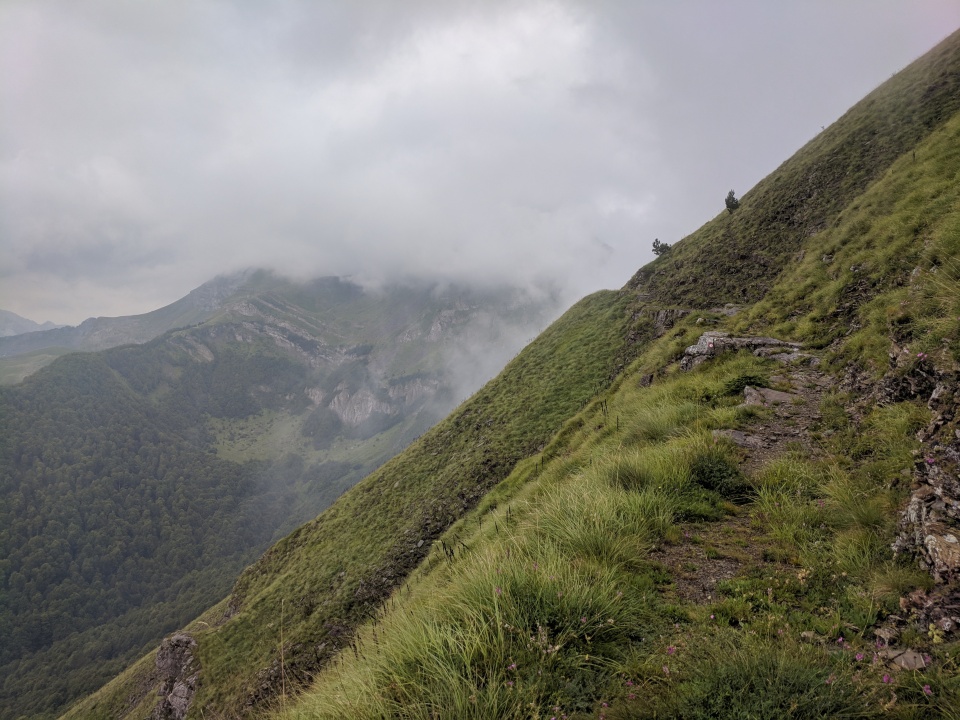 Half way up Maglič, and the path flattened out into this beautiful track. My kind of mountaineering.

Our ridge was all that held back the clouds from the valley to our right. 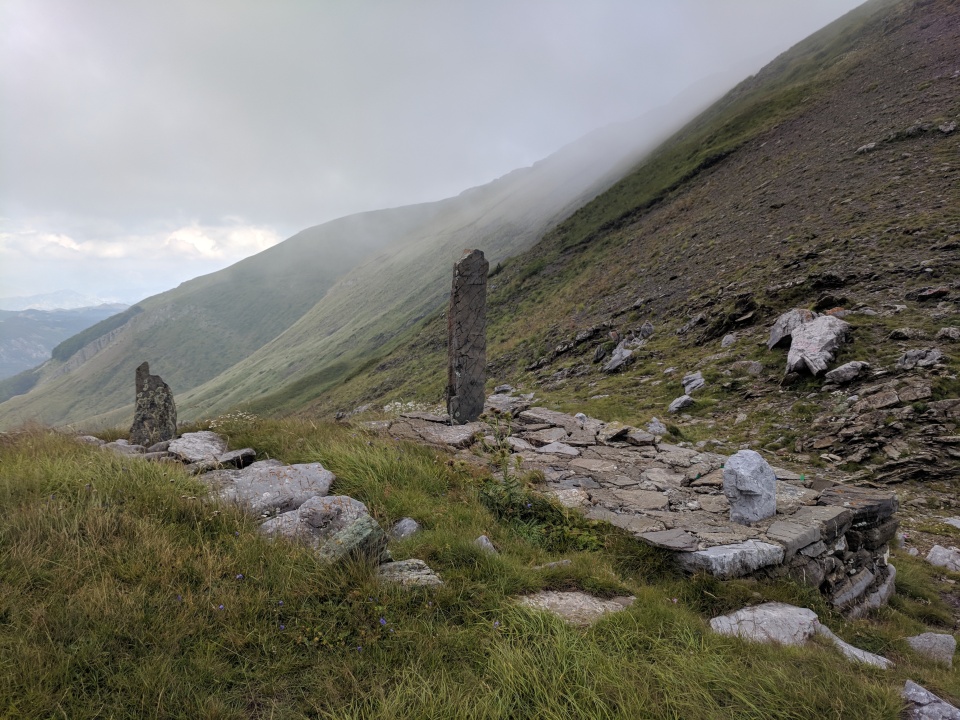 A kilometre shy of the peak we stumbled on some graves. Sometimes it seems as if this whole part of the world is covered in tombs of some sort: in fields, by roads, on street corners and, now, half way up a mountain. But they’re never unsettling. 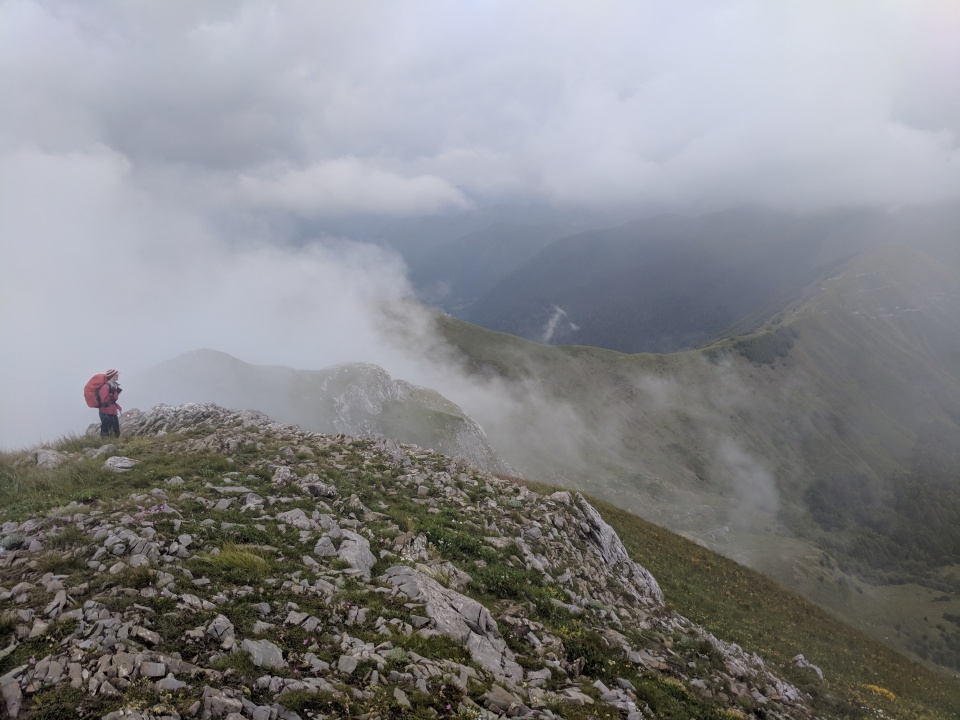 Approaching the summit, we poke back into the clouds.

The majestic view from Maglič peak.

But who needs a view when there’s a functioning stamp!

Just a little mountain. It was cold and windy and we didn’t linger.

On the other side of Maglič, all signs of wind and rain disappeared. We started to feel a bit silly in our heavy gear.

The view on the way down. You’re looking at Albania. 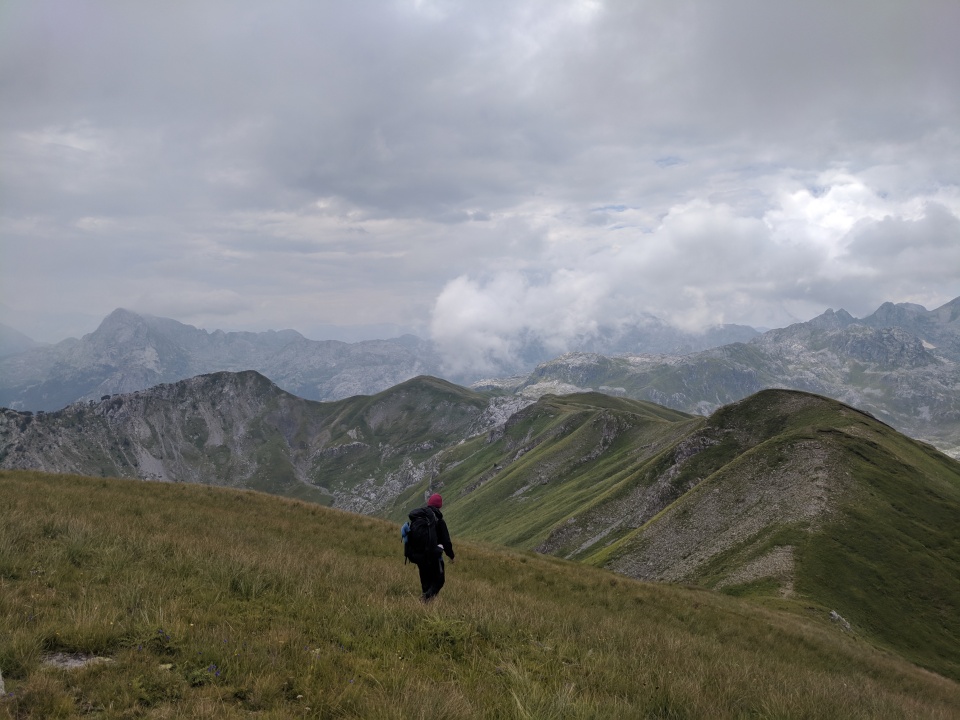 Another shot of the ridge we followed off Maglič, taken from our lunch spot. 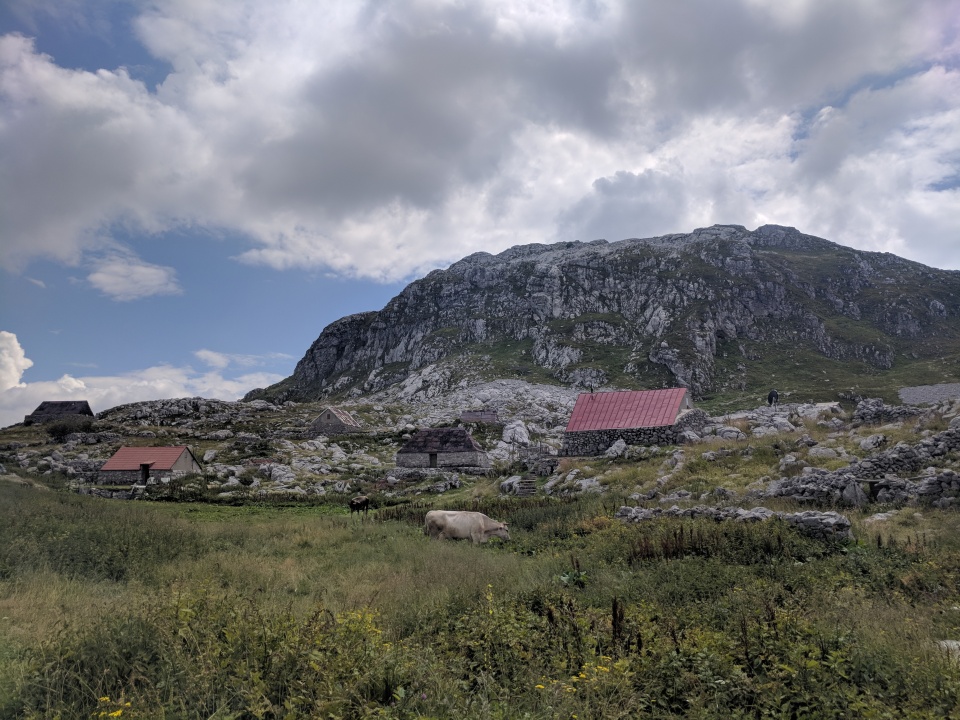 Eventually we popped out at this little village, where we filled up water and watched the bustling pigs and cows.

From the village, it was just a series of roads down to Rikavačko jezero. The view helped pass the time. 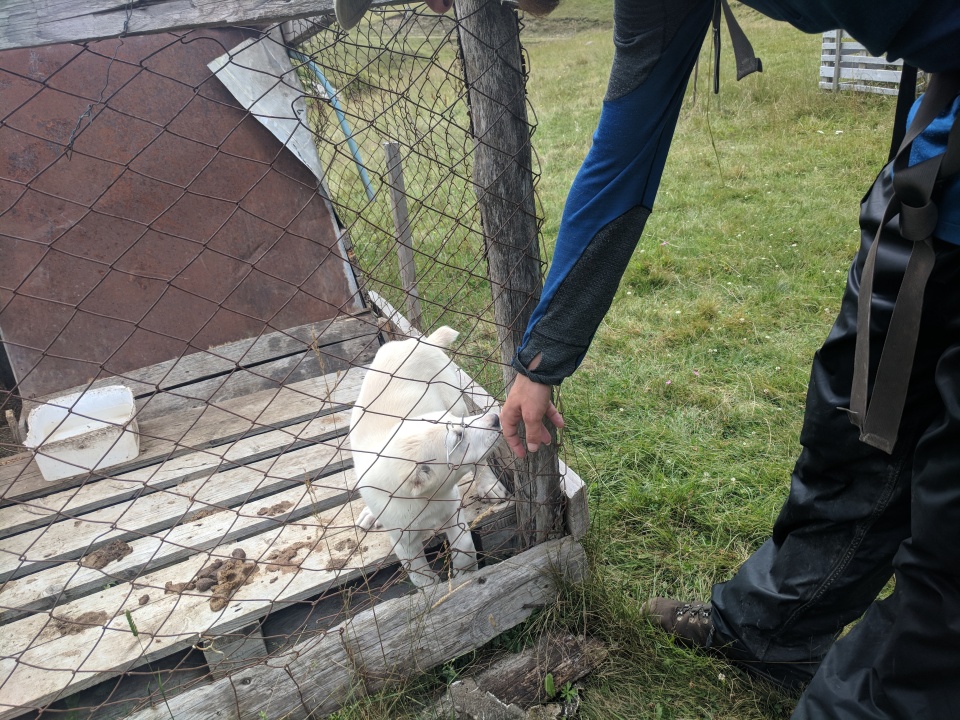 Stretching out by Rikavačko jezero. It was about 3 pm by then, but it was getting hard to persuade ourselves to keep going. And we could see some hikers relaxing on the other side of the lake…

Kris went to work setting up a clothesline.

The finished product. It was nice to have a whole afternoon to relax for once. Sometimes it just seems to be: arrive at camp, set up tent, eat, sleep, and then go again.

Watching the sun over Rikavačko lake. It’s been a really nice day.

Montenegro, Stage 42 (Part 1 of an alternate route to Vermosh via  Maglič ridge walk and Rikavačko jezero)