There are many famous winds. The Siberian High, the Southerly Buster, the Trade Winds, and the Brickfielder to name but a few. They tie the world together in great invisible knots, bringing rain, or dust, or desolation in their wake. Like the tectonic plates, or the ocean currents, they mark the invisible palm lines of the world, and, if you’re skilled enough, you can read them.

I grew up in a gap in the ropes, in a part of the world that turned to the rhythm of floods rather than gusts, and so I am not skilled in the art of wind reading. But, huddled in the lee of Glavaš kuća, even I could feel that we were in the midst of a great wind. Not one of the famous winds, perhaps, but a force just as relentless.

I will always remember my time in the wake of the Dinara Howl.

All night it twisted through the trees around our tent, using the gentle oak leaves to amplify its whisper into crashing waves of sound. I found out later from our German friend who spent the night in a hammock, that in the early hours the wind had lifted him up and flipped him over – it took him ten minutes to break free from the twisted fabric.

A little friend climbs over our tent.

As we departed in the morning, the wind followed us from our campsite like a hungry dog, nipping at our heels. It tugged at our hats and held our clothing flush against our bodies, urging us down the scrubby slope towards the town of Cetina. We endured. Slowly the isolated terracotta roofs grew denser, and the road became wider, until it was clear that we had found the village.

A medieval map of the region we’ve been walking through. ‘Dinaric’ marks the fortress we visited yesterday.

Cetina is a small village without even a market, but we see more tourists than locals. They come to visit the famous Cetina spring which sits in the centre of town. Leaving the wind briefly by the road, we descended into the spring’s hollow. The water had all the incredible green tones of a coral reef – light at the edges, but thickening to the centre where it descended deep to the underground source. Divers have explored to a depth of 115 m, but it goes deeper still. Perched on the slopes above is a beautiful limestone church, and we took an extended break there, reveling in the still sunshine. The Cetina river, which starts at that spring, is the longest river to run entirely within Croatia, and it was to mark our course for the next day or two until we reached the city of Sinj. 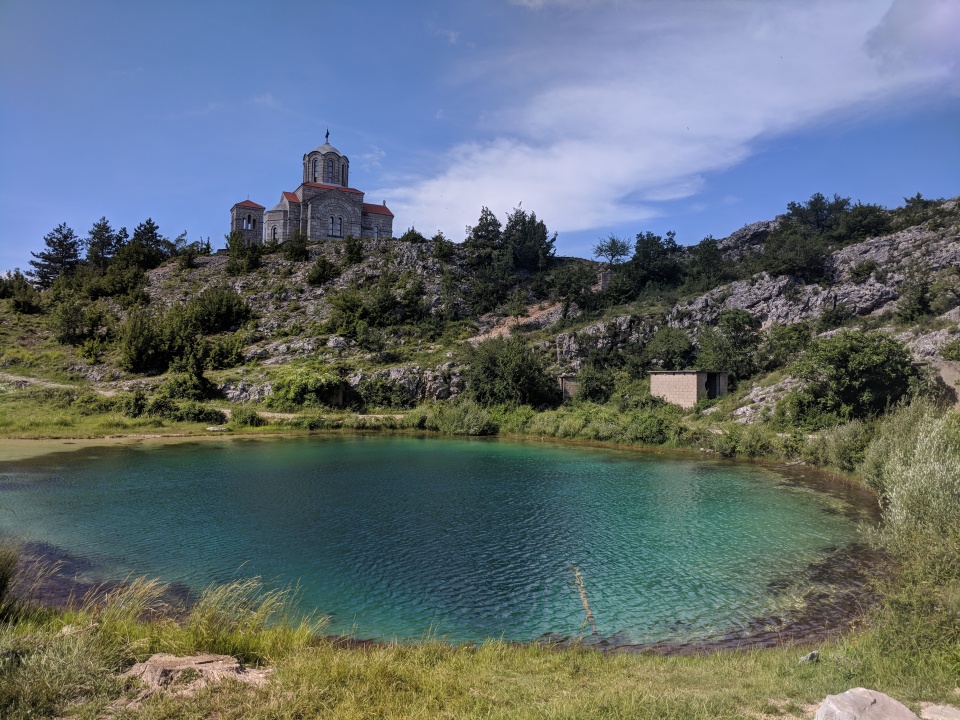 It would not end well if I fell in here with my hiking pack.

Clambering back out of the hollow, the wind immediately lifted up where it had left off. As we walked along the quiet roads of Cetinska Krajina valley, the wind cut at an oblique angle, forcing us to lean sharply just to maintain our course. You don’t realise how much a wind can control your life until you’re stuck in one: not only did it make walking difficult, but we also struggled to hear each other talk, and, when we stopped, it quickly brought the chill out of our sweaty clothes.

There’s a lot of history in that long-inhabited valley. The earliest people arrived in the Bronze Age, and since then it’d been conquered by the Romans, the Byzantines, the Ottomans, and the Croats, as well as seeing conflict during World War II and in the 90s. The people who live here, our track notes tell us, are fiercely proud of the heroism of their ancestors.

We saw a few signs of this history. Most notable was Glavaš fortress which we explored yesterday, but we also passed the ancient Church of the Holy Salvation, and a medieval megalithic bridge constructed from old tombstones. The whole valley felt like a place that had been thoroughly lived in, with tiny villages dotted around every way you looked.

The 9th century Church of the Holy Salvation apparently boasts one of the best preserved early bell towers in Croatia. 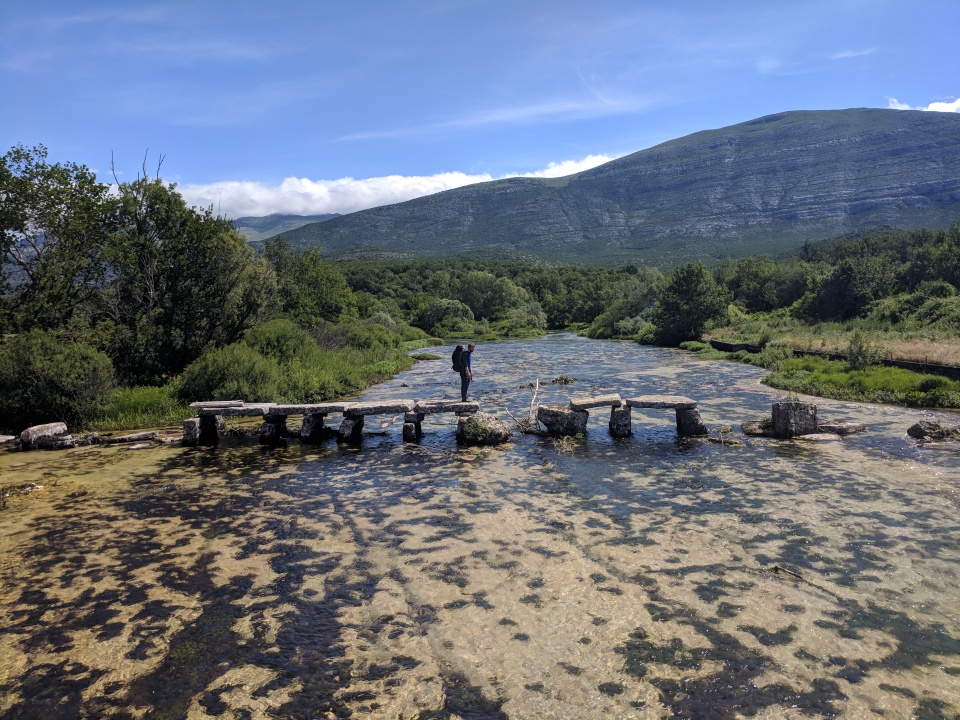 To jump or not to jump?

While it was nice to see the remote villages and ancient ruins, it did seem unfortunate that to either side of us ran mighty mountain ranges that we might be following instead. The reason the Via Dinarica follows the valley roads rather than mountain tracks seems to be due to political issues with inconvenient borders, and safety issues with inconvenient landmines; good reasons, perhaps, but if I were to walk that way again I would visit Troglav peak.

Perućko jezero, our campsite for the night.

Come evening, the Cetina river had broadened out into the great artificial lake Perućko jezero, and we camped by its shores. We managed to find a little patch of grass, tucked into some trees and out of sight of the road. I cleared away the prickles with a pocket knife. Yet even here, the wind somehow managed to find its way through the trees. It buffeted the tent and fed the Trangia’s flame, demanding or attention. We fell asleep to the sounds of wildly dancing leaves. Not once did the wind stop in that whole day of hiking.

I will always remember my time in the wake of the Dinara Howl.

Start and end points: Glavaš kuća to Perućko jezero (we camped at the inlet just below Dabar)

Features:  Glavaš kuća – Cetina spring – Tiny mini market (walk up Vučemilovići road, on your left past the big cemetery in Ježević, until you see a house on the left-hand side with crates of empty beer bottles outside) – Dragović monastery