Dinara is the highest mountain in Croatia. At only 1831 m, she’s even smaller than Kosiuszko, but quite majestic nonetheless. A huge limestone slab, lurching out from the valleys and small towns like a huge baleen whale mid-breach, barnacles crumbling off the sides. Today, we wake peacefully at Brezovac dom and head directly onto her forested slopes.

The rocky path towards the summit has dried off overnight in the strong winds, which gush across from the peaks to our east. It’s a chilly morning. Beyond those peaks lies Bosnia and Herzegovina. In a few days, we’ll cross the border, entering the third country of our Via Dinarica journey. But for now, we just graze the edge, before swinging back south.

Lush forests and valleys on the way up to Dinara, the highest mountain in Croatia

Although the rain has ceased, and despite my best attempts to air and dry them, my shoes are still miserably wet. Before coming to Slovenia, I bought a new pair of Keen hiking shoes, having had a lot of ankle trouble with my previous pair of sturdy Scarpa boots. New shoes are always a risk and unfortunately, these ones have caused ongoing problems. Within one week, fabric had been rubbed to shreds around the tongues – not really causing any performance issues, but not a great sign. Another two weeks in, however, and four holes appeared around the toe creases – definitely causing a performance issue. Water soaks in through the holes and is wicked away right into my socks. It doesn’t even have to be raining – a few wet plants on the trackside and I’m done for.

The good news is, I’ve contacted Cotswold Outdoors whom I bought them from in London and they’re sending me a replacement pair, free of charge! (A different type of shoe this time – I see the original one has been discounted by £45, so I think I’m probably not the only one having problems.) Exercising my consumer rights, woohoo! Maybe I should email The Checkout…

The bad news is, however, no more waterproof shoes for me until Jablanica, a town almost 150 km away. Sigh. Bubbles froth from the toe holes with every step I take. Squish squelch, up the hill.

An example of the holes which have formed where my shoe creases near the toe. I’m watching them slowly join up into one giant rip.

As we climb, the cloud is thick around us. Rocky outcrops loom and suddenly appear like great, silent icebergs. The path is not too steep, not too slippery, and despite the lack of view, it’s really enjoyable to be gaining on the peak. 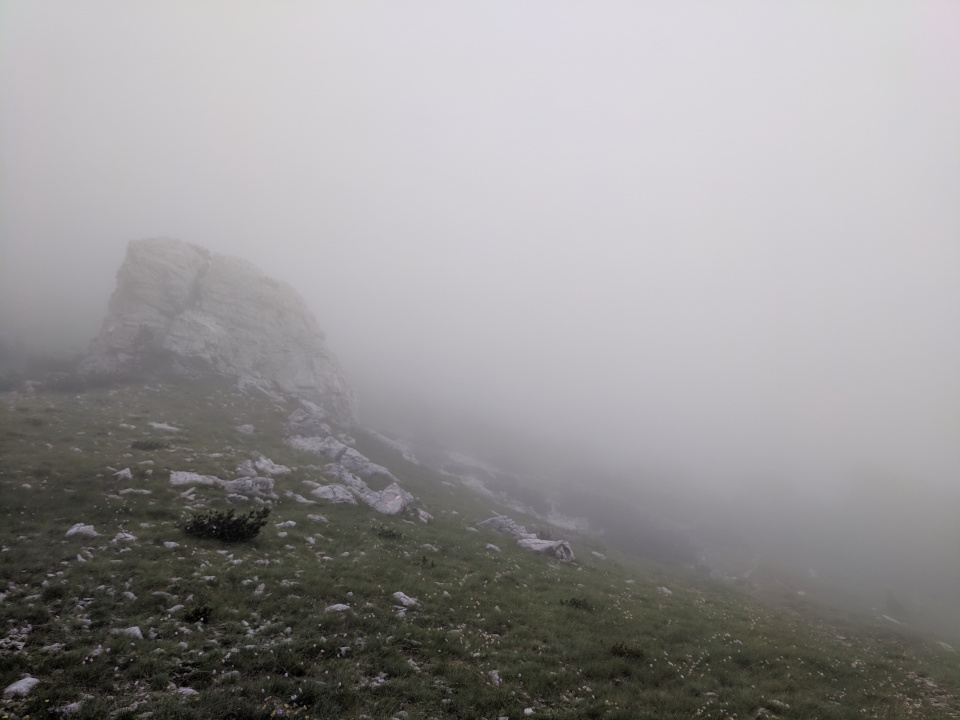 Outcrops appear suddenly in the mist.

Dinara is the mountain this whole chain, the Dinarides, and thus the walk, the Via Dinarica, was named for, so it feels momentous to have finally reached it. We stand in thick mist as we sign the summit logbook, take a photo, and then head down out of the wind. It’s early in the day and we’ve made good time. Yay! We’re set up to make great progress… 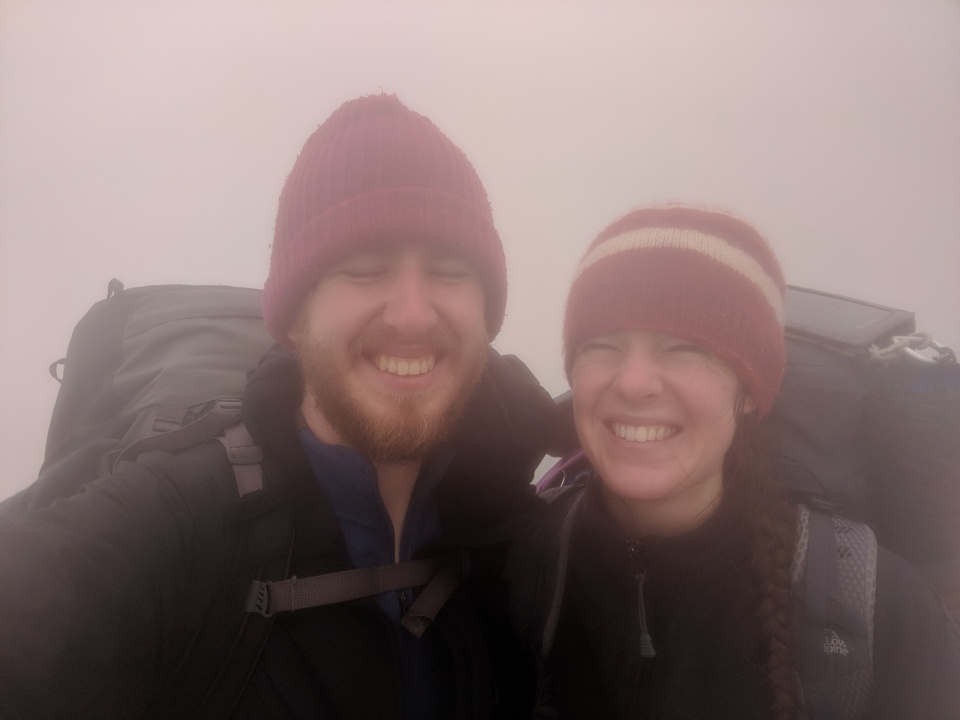 Cold but enthusiastic at the summit!

Should be down the mountain in no time at all…

Someone calls my name from up ahead. I assume it’s Callum, but you never know.

“Can you bring your head torch up here?”

I see a sign saying ‘Pećine’ and an arrow pointing left. I sigh. I’m ambling extremely slowly down the hill. We left the peak what seems like an age ago, but we keep finding interesting things to stop at on the way down, so we haven’t made much progress. The weather’s heated up, the clouds receded and all is peaceful and slow. I dutifully retrieve the head torch and follow Callum’s voice. 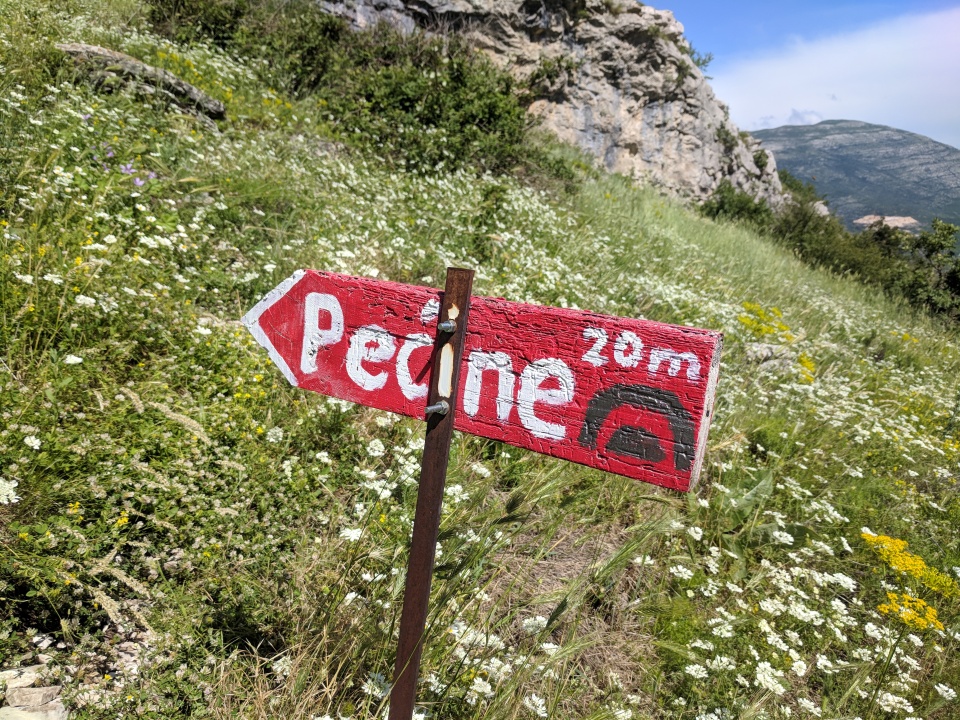 I’m either going to find a cave or a rainbow…

He’s standing at the entrance to a cave, perfectly arched like a train tunnel. We head inside to where it’s cool and dusty and start to explore, ducking low when the ceiling slants down. I presume it’s going to peter out after a few metres, but it doesn’t, and we head further and further underground until I’m wishing I had a ball of wool to trail behind me. We reach a final arch in the tunnel before the dusty ground drops steeply towards a muddy floor. I sense the space open up around us. We’ve found the main chamber. Callum shines the light up to reveal beautiful stalactites, down from the ceiling like jellyfish into a chilly, subterranean world. Light glistens from the single droplets which cling to the tip of each stalactite as we shine the torch around. The colours are a beautiful marble of reds and creams. We could so easily have walked past this cave, which I later identify as Crvena pećina. What a find!

A tiny glimpse of the limestone cave structures within Crvena pećina.

We emerge back into the real world which is significantly hotter, more humid and scratchy. A sign to Glavaš kuća says we’re only half an hour away though. We’re not planning on staying there, but it marks the end of our steep descent, and it’s always nice to reach a hut. We should be there soon.

A few hundred metres on from the cave and we reach an old ruined castle, dating from the 15th to 17th century and built to fortify the land against invading Ottomans (the civilisation, not the lounge feature). Known as Utvrda Glavaš (Glavaš Fortification), the ruin is very cool to see up close and we have a good look around.

Looking up through the old tower of Utvrda Glavaš.

Not, however, particularly conducive to getting through the kilometres…

When we finally reach Glavaš kuća, it’s past 5 pm and we’ve come a grand whopping total of 13 km. We never intended on staying here, but we’re tired, there’s fresh water, a strong breeze to dry my shoes and socks, and also a German tourist with the offer of Schnapps for good measure. Kilometres be damned, we’ll stay here.

I plonk down on the grass and prize off my shoes. Still drenched, and sucking onto my feet like squid. I inspect the holes and can see the deterioration, even just from today.

There’s a debate in the hiking world about footwear. Namely, whether to stick with solid, old, last-a-lifetime leather hiking boots, which are reputed to have better ankle protection and tougher soles, but often require ‘breaking in’; or, to shift to trail shoes, which are more like running shoes, meshy and comfortable from the start, and breathable, with a more flexible sole and definitely not intended to last a lifetime. The new boots I bought in London are more like the latter – very comfortable, but clearly not meant to last. But still, not even a month’s worth of walking?

Hikers on the great American trails, like the Pacific Crest Trail, will often go though a few pairs of these trail shoes. Shoes should be comfortable from the start, is the mantra, the performance should be immediate. It seems like another step towards a disposable world, where we can simply replace everything when it wears out. Is the alternative then to invest in a pair of boots that will never need replacing, where the sole isn’t as comfortable and flexible, not as grippy on the wet rock, but will never wear down? Where the fabric is tough and gives you blisters until you mould it to shape your own feet, which may take a few months, but won’t tear? Where instead of focusing solely on performance, the design makes some compromises for longevity? I’d be inclined to say yes, except for the fact that Callum’s traditional boots are also suffering – a lot. Less than a year old, the leather has cracked and the soles are coming unstuck at the sides, so they’re no longer completely waterproof either. I don’t think the boot/trail shoe battle is black and white. I feel like there must be the ideal compromise out there somewhere, which is why I’ve gone for a replacement boot which will hopefully do just that – make a good compromise between the boot and the shoe. I’ll let you know how it goes!

For now though, at Glavaš kuća, I lie down on the grass and relax, looking forward to the new shoes like the good little consumer I am…

The wind blows all our clothes into a clump outside Glavaš kuća.

1 thought on “Day 28: Brezovac dom to Glavaš kuća via Dinara”