We were just leaving our lakeside camp when the local dog brigade made an appearance. There were three of them, sniffing around independently, but always staying in some sort of triangle, lead dog at the front. Their fur was matted by rain, and they looked a little bedraggled, but they were no hardy street dogs: their happy confidence and collared necks attested to that.

I patted my thigh encouragingly, and the lead dog wandered goofily over. This was a dog that was truly wagged by his own tail: everything from his neck backwards jolted happily from side to side as he lumbered along. 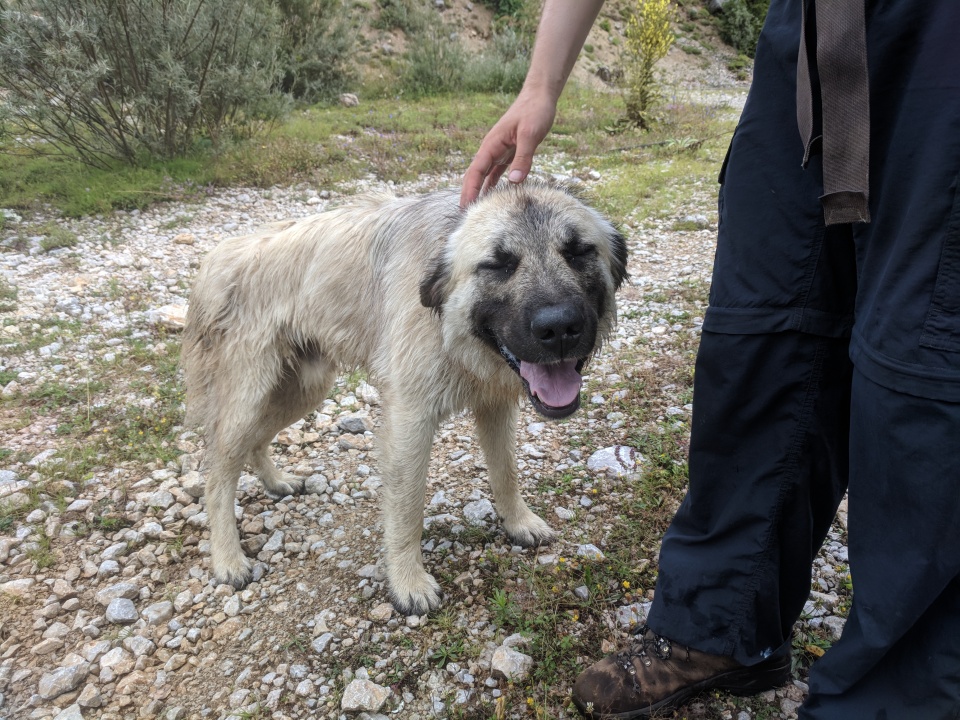 Look at his silly face.

He seemed friendly, and – when will I learn? – I gave him a big pat. That was probably the start of it. For the next three or four kilometres we found ourselves trailed by a little fan club of dogs, always one turn behind as we walked around Piva lake. It was quite cute, but sadly we couldn’t be nice to them: we didn’t want another Zuza situation on our hands. So we had to use our angry voices and chase them back home.

And so, it was with heavy hearts that we crossed the soaring Piva dam, and began our climb out of the canyon. This was our first real foray into Montenegro – being just a few hundred metres from where the bus dropped us off two days ago – but it didn’t really begin well.

Piva canyon, as viewed from part way up the slope.

The air was thick with moisture. At first it was just a light mist, soothing my burnt skin from yesterday’s climb up Maglić, but soon it crystallised into a drizzling rain. It wasn’t heavy, but it made the steep slope just a little more perilous, and we had to cling to trees and grass to stay upright.

That canyon wall struck me as a place that was never really meant to have a hiking trail. The path was a series of tight switchbacks and steep scrambles – going down would be even more difficult – all hanging over an exposed drop of a few hundred metres. It started off well-marked, but soon we were following half-painted dots, and then, after crossing a precarious rock slide, there were no markings at all. At first we figured that the route markers had been left unfinished, but it eventually became abundantly clear that we’d drifted off course. By then it was too late.

The climb up the canyon was only supposed to be a kilometre or two long – two hours tops, we’d thought – but already we’d been stuck there for three with no end in sight. Power lines ran up from the dam, following a ridge above us, so we scrambled straight up the canyon wall hoping to meet some sort of service track. Rock climbing is particularly difficult in bulky hiking boots and with heavy packs, but after half an hour we were at the power lines. From there, we followed some faded service markings pointing directly up the slope. They were better than nothing, and an hour later we crawled over the top of the canyon, wet and exhausted, only to see a well-marked and gently sloping track right beside us. It wasn’t a highlight.

The walking was a lot easier from there, over the minor roads of Piva plateau, heading towards Nedajno some twenty kilometres away. We passed through a series tiny localities and villages, waving occasionally at the people scything in the fields. Bit by bit, it seemed, they were gathering up all the grass of the plateau into tidy little stacks. It must take an age.

As we walked the rain came and went and came again, slowly worsening until, as evening approached, it was a proper downpour. We plodded along in silence, feeling our rain gear slowly fail.

A few kilometres out from our destination, Nedajno, a car pulled over and offered us a lift. But we’ve come this far with no lifts, and so we refused, leaving the driver understandably perplexed. If I ever do another thru-hike I think I’ll have to revise this policy of refusing lifts.

At last we reached our destination: the Nedajno cafe, where we were quickly ushered in to the warm restaurant area. Slightly shell-shocked, we soon found ourselves showered, in camp clothes, and eating an incredible home cooked dinner of mashed potatoes, fried zucchini and eggplant, two kinds of cheese and risotto, along with the usual delicious selection of condiments (which I forgot to take a photo of). I’m glad that we’re hiking, or otherwise I would have no hope of finishing these enormous meals we get everywhere we go. The rain falls on, and we relax.

This is everything I want (note the tiny wi-fi sign in the background).