At the water’s edge, we’re only a kilometre or so from the Albanian border. We’ll duck back into Montenegro in a few days because our route is fairly convoluted, but the fact remains that we’re about to enter our last country of the Via Dinarica. We’ve hiked across Slovenia, Croatia, Bosnia and Herzegovina, and now Montenegro is done, too. We only have five days left of walking. How on earth did that happen?

It’s a peaceful way to farewell Montenegro, a country which, although at first I found a little dull and flat to hike through, really grew on me. The incredible green colours of the mountains around Biogradska Gora and Komovi, delicious blueberries gleaming beautiful and precious as pearls in the foothills, the friendliness of the people living their lives at a comfortable pace, countless dogs and puppies and cows and horses, and oh man, the food… Yeah. I liked Montenegro.

We pack up quickly and head up into a trackless gully towards the border. I feel a little guilty as we try to disappear inconspicuously into the trees. This is technically an illegal crossing, but the only way we could sensibly wrangle our route. Tomorrow we’ll sneak back into Montenegro, ready to do our pre-arranged, legal crossing near a little town called Vusange. We’ve decided our consciences can take the 24 hour discretion. But there’s no turning back now anyway. A concrete marker suddenly looms and oops, we’re in Albania. 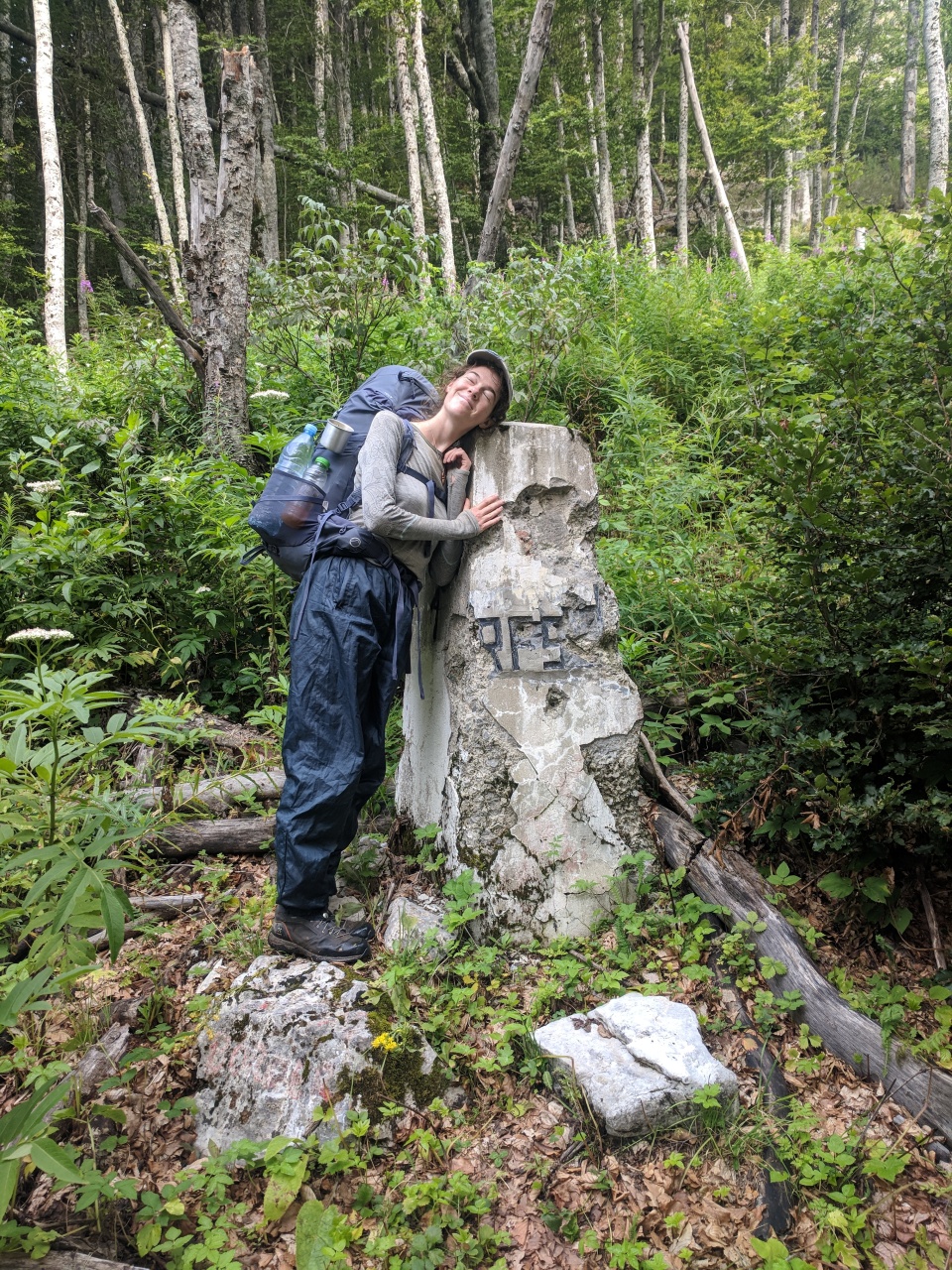 There’s a definite shift as soon as we cross. The first thing I notice is the weeds. They’re everywhere, tall and lanky, in thick clumps with garish pink flowers. Everything seems dustier and thirstier than on the other side. The stems of the plants are like straw.

The next thing I notice is the marker dots. Our trusty white-centred red dots, which we’ve followed faithfully (sometimes a little too faithfully) for two months, are different here. 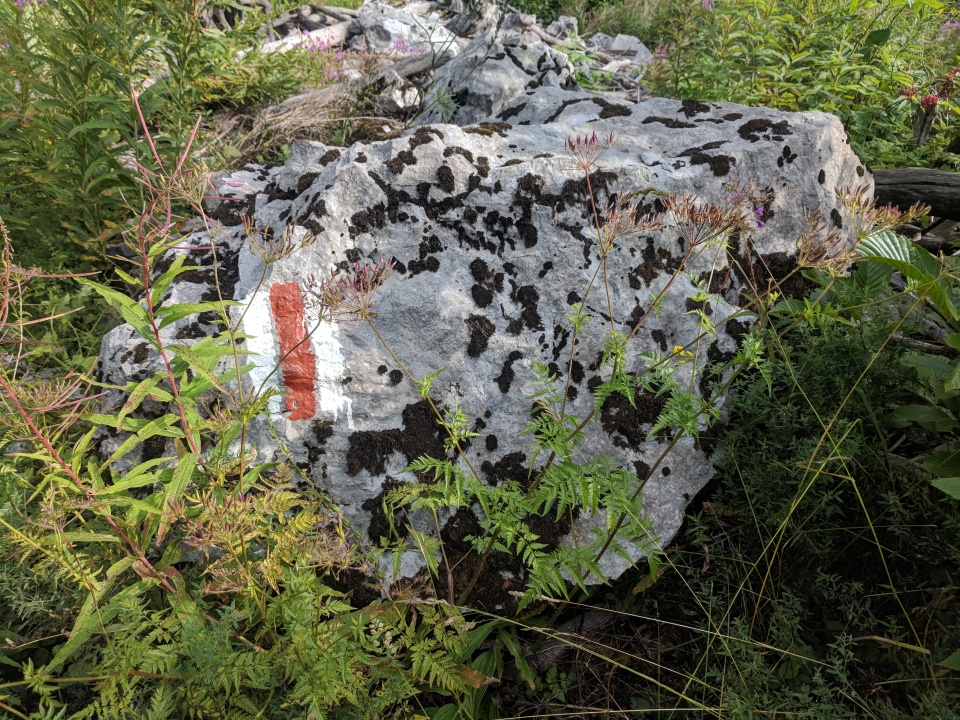 They put white on the outside?!! This changes everything… I hope we don’t get lost.

We follow the well-made but weedy track for a few kilometres until it gets wider and muddier, the trees bigger with darker-green leaves. VERMOSH, a helpful tree reads, pointing left. Vermosh is a small, scattered town in the northernmost reaches of Albania. It should have a few little things including, ideally we hope, lunch (and yes, I’m already thinking about lunch despite the fact we’ve only walked about 3 km… so sue me).

It’s a bit of a dull journey there. For the most part, the road remains muddy, forested and uninhabited except for mosquitoes. Towards the end, it opens up into a huge expanse of rocky riverbed, as if the whole valley has been landscaped on a small budget: “Ah crap, we’ve run out of cash… Billions of small white pebbles it is!” 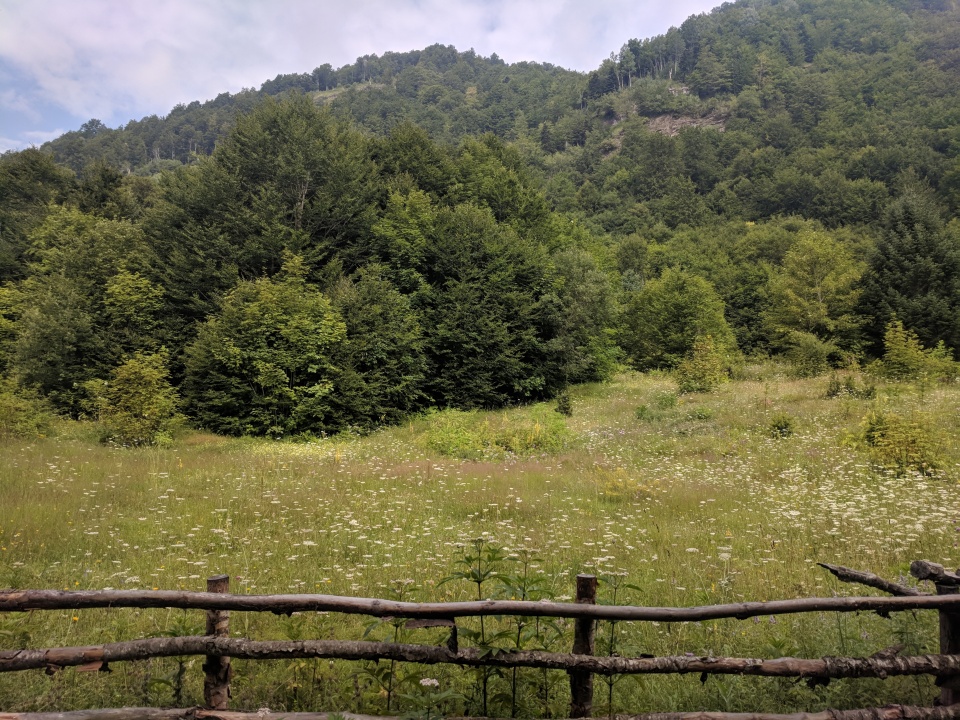 A grassy bit of track heading to Vermosh… Somehow despite the fact that it was mostly forest and pebbles, as described, I only have photos of the brief grassy sections. Sighs.

Every now and then, we also pass concrete bunkers, remnants from the strict communist regime which existed here from the end of World War II until 1992. Bunkers like these in different shapes and sizes cover a huge amount of Albania – nobody agrees on quite how many there are, but it ranges from 150,000 to 750,000. Nowadays they’re used as memorials, played on by kids and incorporated into farms, but mostly just abandoned. 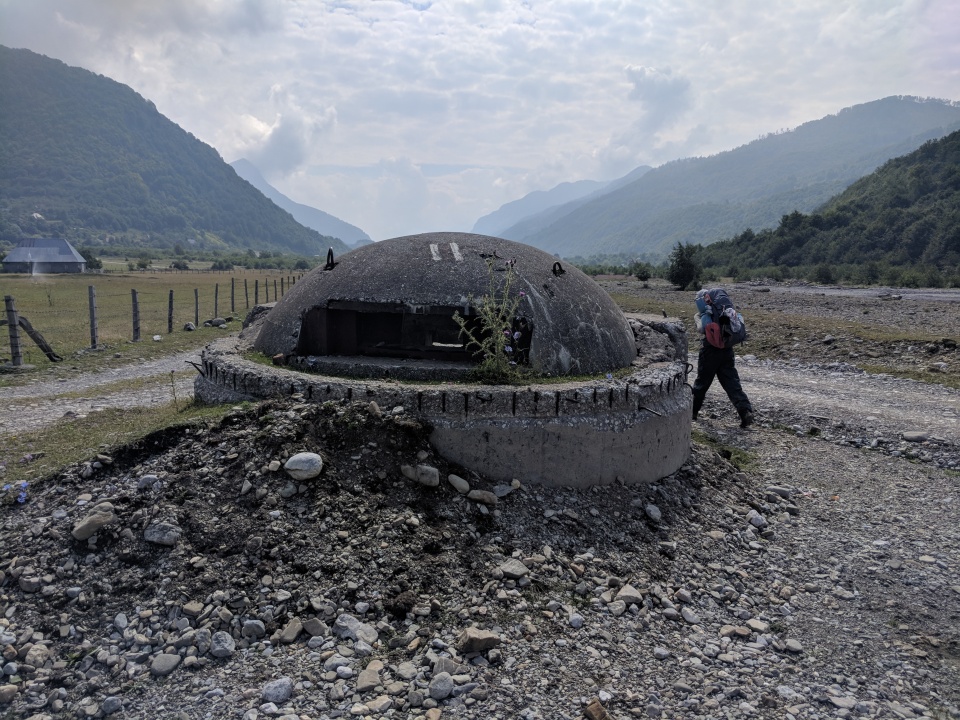 A communist bunker in Vermosh. Still not too good for a dot. 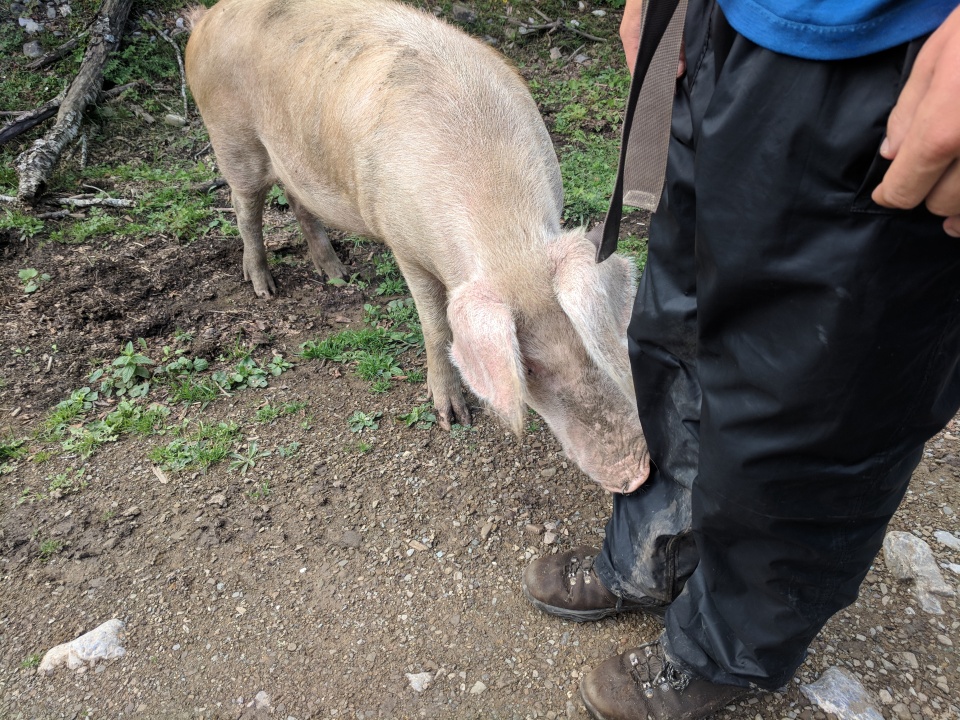 A pig on the roadside gives Callum a little nibble.

Just before reaching the centre of Vermosh we find the Peraj Guesthouse by the side of the road. Huge old apple trees grow in the garden, bursting with tiny green apples. It’s a garden oasis, ready to save us from the monotonous heat, dust and pebbles. We sit outside under the trees and have some lovely sludgy Turkish coffee. It’s a really relaxing place, owned by a big family whose house forms the main part of the guesthouse. Callum reads his book and I do some writing as the various members of the family potter round, cooking, washing, fixing things and having coffee and, in the case of the small boy, switching between shyly checking us out and repeatedly calling, “Muuuummmmm“. An hour or so later we have lunch – our first, delicious taste of Albanian food is pale green paprika with yoghurt, a tomato salad and homemade fried potatoes. Another hour passes. It’s not a long day, so we can afford the time. There’s no rush. 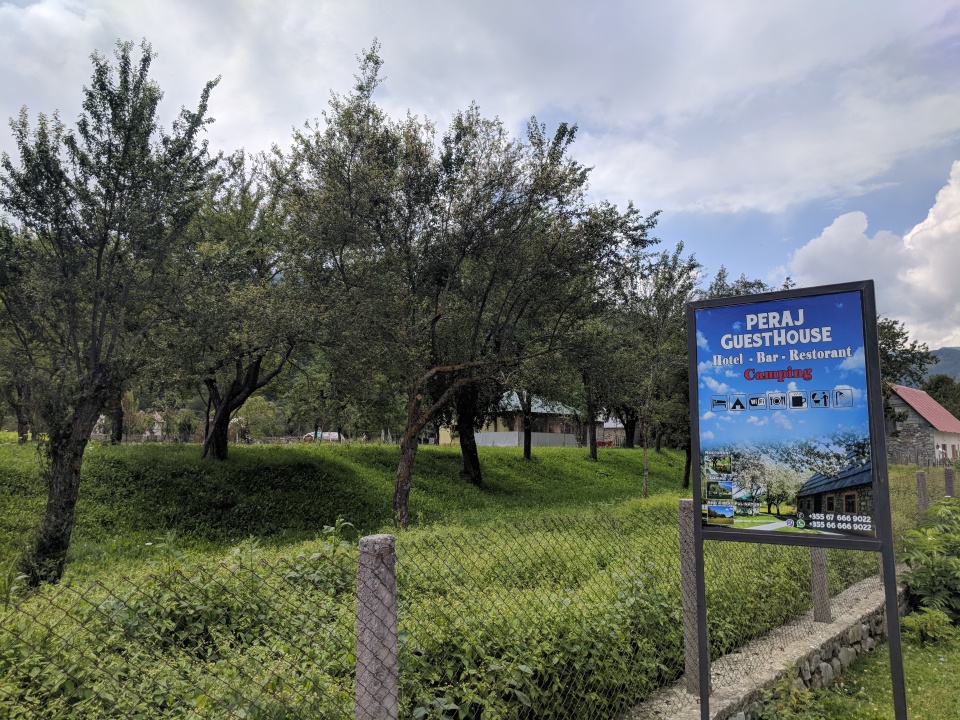 Not very on top of photos today. As we leave, I turn round. Damn it, I wanted a photo of the apple trees!! I settle for this one, from afar.

We walk on in companionable silence. A few kilometres further and our route pitches right up into a steep clay gully, riddled with sheep tracks. This is not a hiking track really; it’s a foot track used by locals to graze sheep up into the mountains at a small settlement beneath the peak of Maja Greben. We’ll have a chance to experience something quite everyday, which for us is special.

After summiting Maja Greben, we’ll head over the other side to the village of Lepushë. I know absolutely nothing about Lepushë and have no idea what to expect. I have to admit, my brain is struggling by this point of the trek – how many hundreds of new towns, lakes and mountains have I learnt about, interpreted the pronunciations of and passed through? I know that just because the trek is wrapping up doesn’t mean we won’t have experiences or pass through towns just as special as those in the middle of the hike… but my brain is getting tired. I think it sees home. I also know that if the opposite is true however, and it’s just a dull, uneventful slog to the finish line, it shouldn’t by any means represent or diminish my feelings towards the whole hike. These thoughts dominate as we head up the hill. It’s a steep, long walk, so I’m glad to have something to chew on. 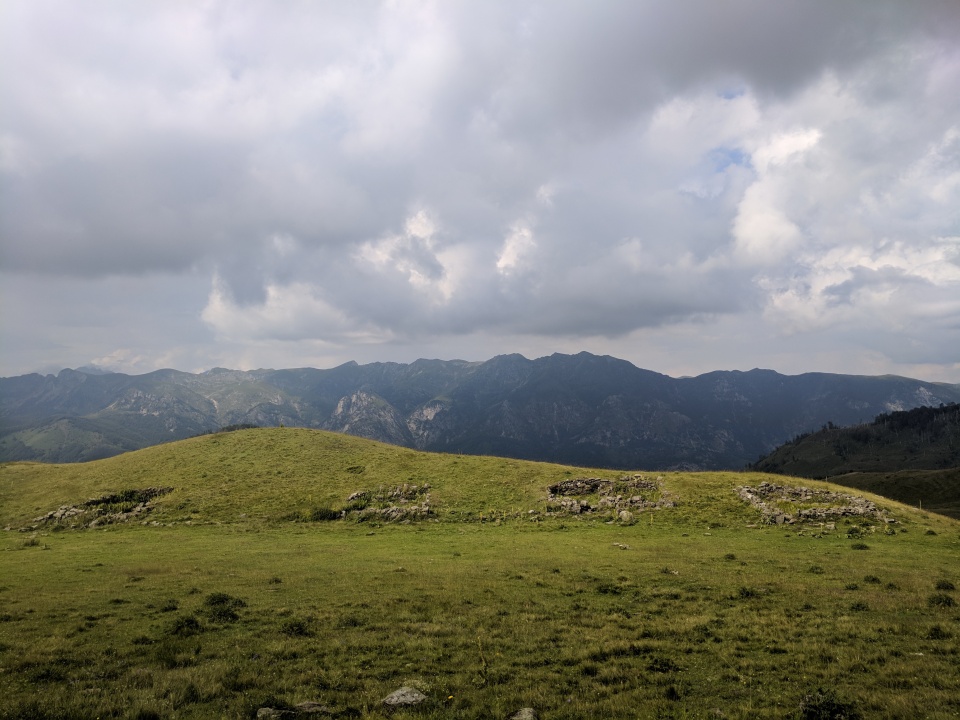 Grassy meadows near the summit of Maja Greben.

We get a bit lost around the peak but eventually muddle our way up. Greben is a small mountain, but a very good view. Not only can we see back into Montenegro, but down to Lepushë (it looks small and cute) and across to Maja Vajush (a border peak also known as Mount Taljanka that we climb tomorrow in order to slip back into Montenegro). Most impressively, however, are the famous Accursed Mountains (the mountains of Prokletije National Park) which loom to the south. Huge, ancient columns of rock thrust into the sky beyond, these behemoths are the highest mountains in Albania. They look cold. Slate-gray and impenetrable, swathes of ice cracking from their shoulders. I get a little shiver. In a few days, we’ll try to climb the highest one, Maja e Jezercës. 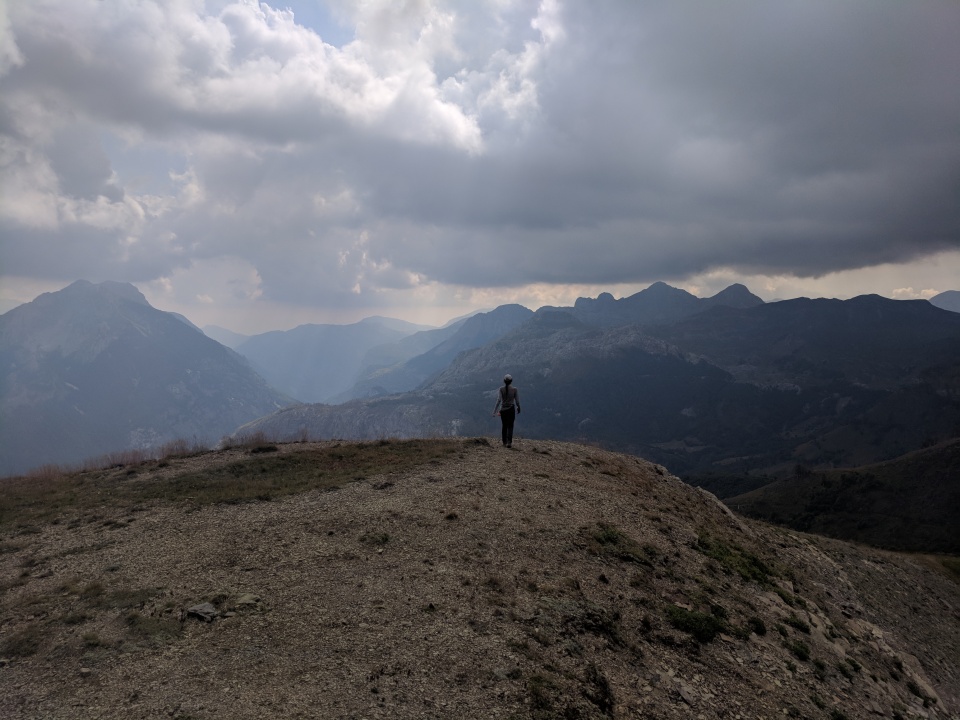 The summit of Maja Greben.

It’s only four kilometres to home, so we speed up and head swiftly down. Before we reach town however, we pass a little makeshift home with a lot of chickens around. A young woman appears, smiling, and invites us in for tea. We, of course, say yes. She’s so friendly, but we cannot speak a single word of Albanian (except ‘čaj’ which is pronounced ‘chai’ and means tea) and she not a single word of English. We sit under the awning happily sipping tea and try to communicate but don’t have much luck. She shrugs good-naturedly and brings us out some freshly picked blueberries and ‘raki’. Then, just as we’re thanking her profusely and gathering our bags to leave, she seems to have an idea. From the roof of her awning, she collects four thick bunches of drying flowers, puts them in a plastic bag and hands them to us, saying “Čaj!”… And that’s how I end up carrying a kilogram of traditional mountain tea down the mountainside. 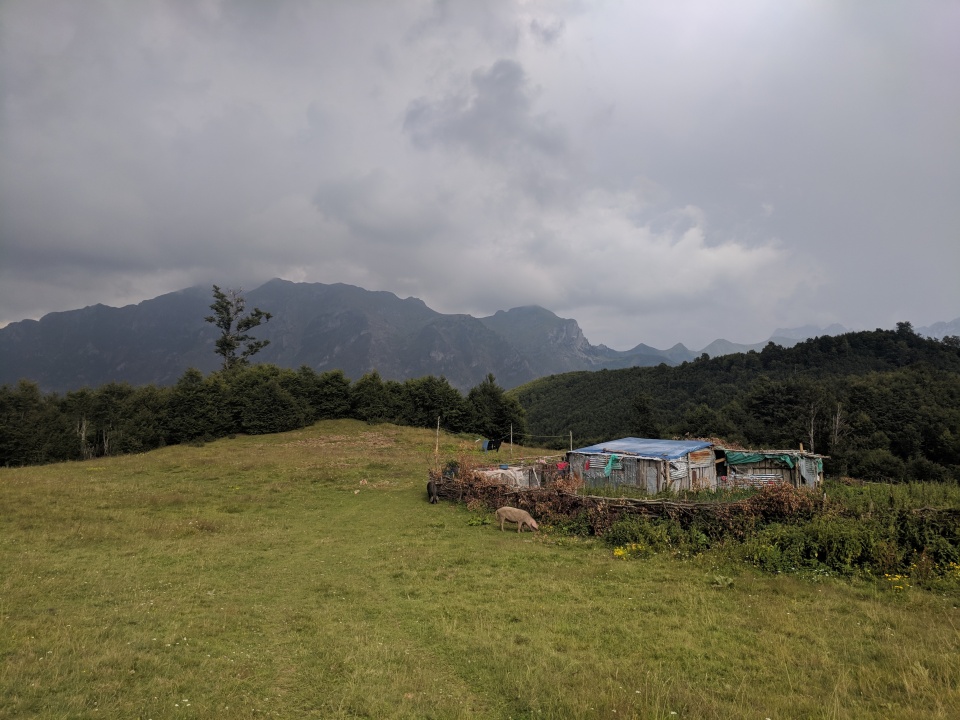 The house of the Albanian woman. We tried to exchange names, and I think hers was Regina. Note the pigs outside – five piglets come up and simultaneously give me a snuffle as we leave and I die a little of happiness.

We finish off our descent into town, round a final corner past a particularly attractive cow and then suddenly it’s like we’ve passed through a portal from rural to city. A wide asphalt road is crowded with cars (and, to be fair, cows); minibuses with strips of pulsing LED lights are parked on the roadside. There are three cafes that I can see, but about ten signs for other places, including more cafes, plus guesthouses, campsites and restaurants. Only 500 m away!! 480 m!! 50 m!! They proclaim urgently. I look behind me to check we haven’t somehow come to the wrong place. But no – this is our little Albanian town for tonight. Lepushë. 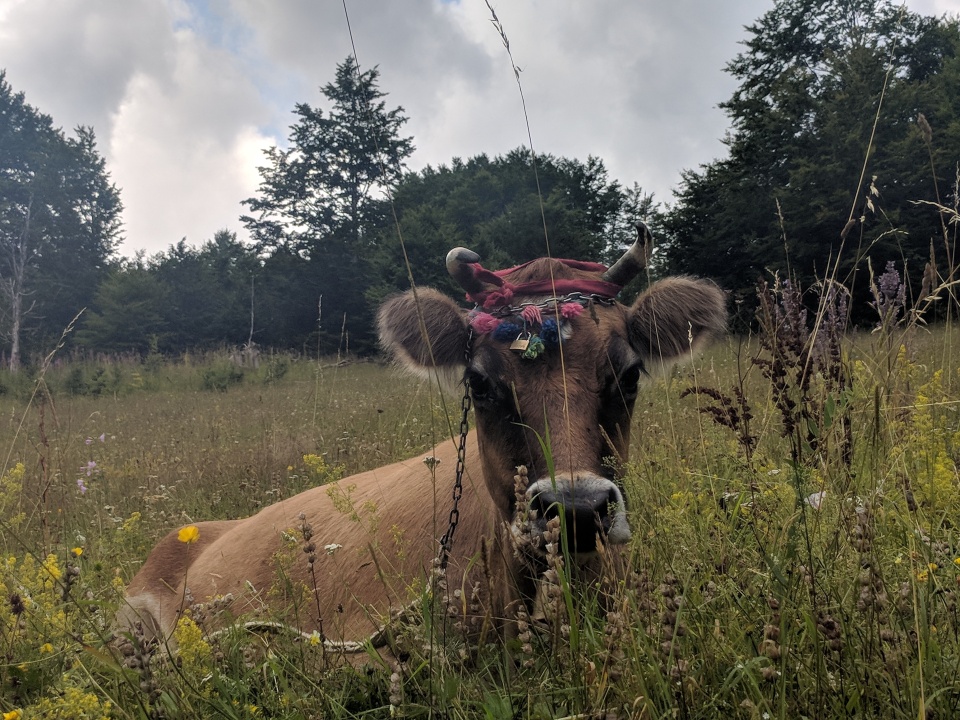 Once I’ve calmed down a little, I realise it’s not actually too busy, it’s just the shock. Because we don’t aim for anywhere really, we have no destinations and often see no other tourists for days, we’re sometimes caught off guard when we hit a town that for whatever reason has been chosen, elevated high above the rest and filled with tourist infrastructure. Still, by the time we pick a guesthouse and head off, I’ve decided I quite like it here. It feels very real still.

We’re still working off our Trešnejevik debt, so we’re camping on the guesthouse lawn tonight. But it’s a beautiful evening, the grass is luscious and we pitch beneath a few old plum trees. Occasional cows sneak in to munch the grass, which the man who owns the place shoos off with a practiced hand. Dinner is in the house, a quick, simple affair. It’s been a fairly easygoing day what with all our rest stops, but still long and full. Lots of new things. It’s a lot to take in a whole new country as the Via Dinarica draws to a close. But we’ll do our best. Judging from the vibe I got today, I think I’ll like it here just fine. 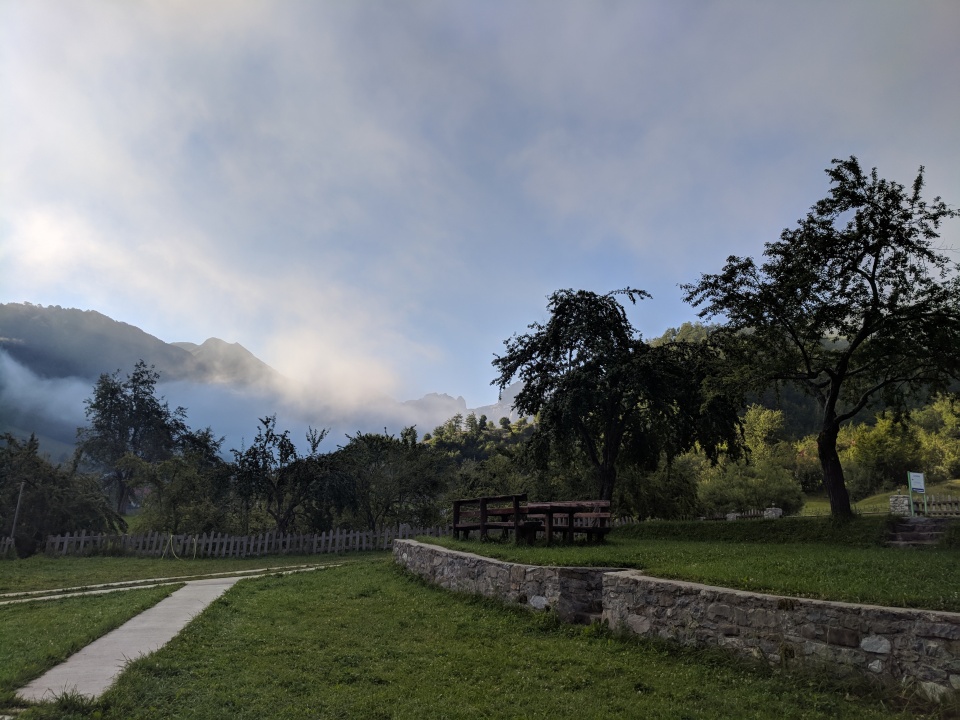 Our backyard campsite in Lepushë.